Employees who work from home or other remote locations are happier with their jobs and may even work harder than those in the office to prove that they’re not slacking off, according to a new analysis from Cardiff University. But there’s also a downside, say the researchers: Remote workers tend to work long hours and may struggle with separating their work and home lives.

Weighing these pros and cons is important, the researchers wrote in the journal New Technology, Work and Employment, because working remotely is a growing trend. In the United Kingdom, where the authors are based, the percentage of people who work in traditional workplaces has fallen from about 75% in 2001 to 66% in 2012, they wrote. And in the United States, the share of people doing some or all of their work from home grew from 20% in 2003 to 24% in 2015.

It’s also a trend that’s gotten a lot of attention, with recent headlines proclaiming that “The Office Is Dead” and that workers are “escaping to the country” and “shunning the commute.” To dig deeper, researchers reviewed several previous studies and surveys of workers to come up with several evidence-based conclusions.

For one, they say, employers stand to benefit from allowing their workers to log hours from home. In surveys, remote employees are more likely than in-office workers to say that “their job requires them to work very hard, that they work beyond formal working hours to get the job done, and that they put a lot of effort beyond what is required,” the paper states. In one example, 39% of remote workers said that they often work over and above the formal hours of their jobs, versus just 24% of office workers.

And in many ways, they say, employees benefit too: Remote workers tend to report higher levels of job satisfaction and are more likely to say that their jobs are pleasurable and stimulating than people doing the same job in an office setting.

But back to those longer hours: “Borderless working” also has some costs associated with it, say the authors, particularly the inability to insulate work from other aspects of life. “This is reflected in relatively high reported difficulties in ‘switching off’ and unwinding at the end of the work day,” the authors write. (Yes, it’s true that even people with traditional desk jobs worry about work when they’re not in the office. But research shows that these concerns affect a higher percentage of remote workers—44% versus just 36% in one survey.)

Coauthor Alan Felstead, a research professor in the school of social sciences, says that remote workers can benefit by finding ways to reinstate the boundaries between work and home. “Some reinvent the office in the home, some time-shift space so that tables switch from dining tables to office desks,” he told RealSimple.com in an email. “For others, the blurring of roles becomes second nature.”

The authors say that larger, longer studies should be done to truly determine the real costs and benefits of working from home. They also point out that, despite the existing evidence, some companies have still reported negative experiences with remote employment. In 2013, for example, Yahoo banned working-from-home because “speed and quality are often sacrificed,” the company said.

Overall, though, the researchers conclude that working remotely appears to be “advantageous to employers and employees.” And while the office may not be quite dead just yet, they say, “the detachment of work from place is undeniably an important aspect of the changing nature of work in the twenty-first century.” 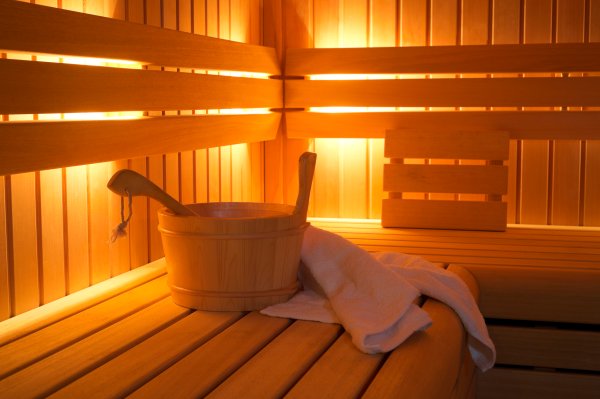 The Surprising Health Benefits of Saunas
Next Up: Editor's Pick