This image released by Sony Pictures Classics shows Liam Neeson in "Mark Felt: The Man Who Brought Down the White House."
Bob Mahoney/AP
By Katie Reilly

A new cinematic depiction of Mark Felt, the former associate director of the FBI better known as the informant Deep Throat, is ringing true with at least one person closely familiar with the story.

The film, Mark Felt: The Man Who Brought Down the White House, details how Felt leaked information about the Watergate scandal that ultimately led President Nixon to resign. And Felt’s daughter, Joan Felt, said the movie helped her understand him in a new light. “I was seeing my Dad in a new way and for the first time, really emotionally, feeling and appreciating the pressure that he was under, the strength that he had to call upon in order to handle such a difficult situation,” she told TIME, recalling how she grew emotional last year watching actor Liam Neeson film a scene as her father, who died in 2008.

Now 73, she said she learned the truth about her father’s role in the Watergate investigation in increments, gathering hints in the early 2000s when he turned away almost every journalist but accepted a visit from Bob Woodward or when he accidentally slipped into the first person while discussing Deep Throat after watching All the President’s Men.

But, beyond Neeson’s characterization of Felt, how does the rest of the movie compare to the real history? Here’s where it sticks to reality and where it took some liberties:

Fact: Mark Felt leaked to reporters other than the Washington Post‘s Bob Woodward and Carl Bernstein.

Woodward is briefly featured in the film, which includes a version of the parking-garage meeting made famous by All the President’s Men. But the film shows Felt meeting more often with TIME reporter Sandy Smith, who also covered the Watergate investigation — and whose reporting also contributed to the story. (For example, when a Senator asked acting attorney general Patrick Gray about allegations the FBI had wiretapped journalists, he cited a report in the March 5, 1973 issue of TIME.)

Mark Felt writer and director Peter Landesman said he made the decision not to focus on the better known reporting work of Woodward and Bernstein so that he could step back from the prevailing Watergate narrative. “Watergate is not the story of two reporters,” he told TIME. “Watergate is the story of the system, and when the system broke down, one person had to create a new mechanism.”

Fact: Mark Felt and his wife traveled to a commune to find their daughter.

The Watergate investigation wasn’t the only drama going on in Felt’s life during the period the film covers. Around the same time, Felt’s daughter became involved in a counterculture movement that stood in opposition to the FBI. Though she was not an activist for a group actively monitored by the agency, such as the Weather Underground, Joan Felt confirms that she was a “flower child” and really did move to a commune, where her parents tracked her down after three years of being out of touch.

“That car coming down the road from up above, down the driveway, coming into relief into our world was such a shocking moment,” she said, recalling the day her parents arrived while she sat in a field holding her infant son. “It’s a moment I’ll never forget.”

Fiction: …But the family reunion didn’t play out exactly the way it’s shown on screen

“My friend and I — the two mothers there with our babies — we were actually naked in the field, so we were horrified that my parents were coming at that particular moment because I knew that my mother, especially, would be so disapproving — as she was,” Joan Felt said. “We both jumped up and raced for our residence, which was a re-converted chicken coop, to quickly put on some clothes before my parents could see too clearly what was happening.”

Fact: Mark Felt was asked during a grand jury interrogation whether he was Deep Throat.

The final scene of the Mark Felt movie draws on a real episode that Woodward recounted in his book about Felt, The Secret Man. As Woodward tells it, the story was relayed to him by Justice Department official Stanley Pottinger during a lunch meeting in 1976. Pottinger had noted that at one point during a grand jury investigation about illegal break-ins by FBI agents, Felt “volunteered with a smile that he was such a frequent visitor at the White House that some people thought he was Deep Throat.” Woodward continued:

The film cuts off before Felt answers the question. In reality, Pottinger then told the stenographer to stop taking notes and told Felt that, because he was under oath, he was required to answer honestly. “I consider the question to be outside the bounds of our official investigation, so if you prefer, I’ll withdraw the question,” Pottinger told Felt, who asked that the question be withdrawn.

Nixon resigned in 1974 because of public scrutiny over his involvement in the Watergate scandal. But the movie’s title — which describes Felt as “the” man who brought down the White House — has been controversial. Woodward and Bernstein wrote a letter to Landesman last year calling the characterization “demonstrably false” and saying Felt was only one of “several dozen” sources they used in their reporting.

“Felt played a role, at times a courageous one,” Woodward told The Associated Press. “But this portrait of him as ‘the man who brought down the White House’ just isn’t accurate.”

But Landesman told TIME that he believed Felt’s story was the most compelling part of the saga, and that he merits the title by his position at the center of the investigation.

“I find Felt more interesting because Felt’s the one — he wasn’t just doing his job,” Landesman said, “he was sacrificing his own life.” 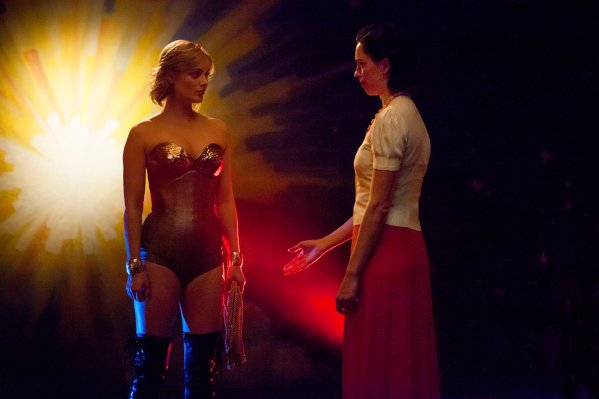 The Women Behind Wonder Woman
Next Up: Editor's Pick