Spain’s King Felipe VI weighed in on the country’s growing political crisis Tuesday, slamming what he called the “irresponsible” leaders who pushed for Catalonia’s independence referendum as hundreds of thousands took to the streets to protest police violence at polling stations.

The 49-year-old monarch, who rarely comments on the country’s politics, criticized pro-secession leaders as a threat to Spain’s democratic stability with Sunday’s referendum, which passed with 90% of the 2.3 million votes cast, according to the Associated Press, with turnout less than 50%.

“Today Catalan society is fractured and in conflict,” King Felipe VI said. “They [Catalan leaders] have infringed the system of legally approved rules with their decisions, showing an unacceptable disloyalty towards the powers of the state,” he added, emphasizing the importance of preserving Spain’s national unity.

Sunday’s referendum was met with violence from Spanish police, who fired rubber bullets and injured more than 900. On Tuesday, workers’ unions held strikes and 700,000 demonstrators took to the streets of Barcelona, AP reports.

Read more: Catalonia Just Voted for Independence From Spain. Here’s Why That Is Unlikely to Happen

Catalonian President Carles Puigdemon is expected to make a statement at 9pm local time, Reuters reported. He had previously announced plans to declare independence in the days following the referendum.

Catalonia, Spain’s richest region with its own distinct language and traditions, has long held that it contributes more to Spain’s economy than it receives in return — about one-fifth of the GDP. A symbolic referendum in 2014 also passed with overwhelming support, but was poorly attended. 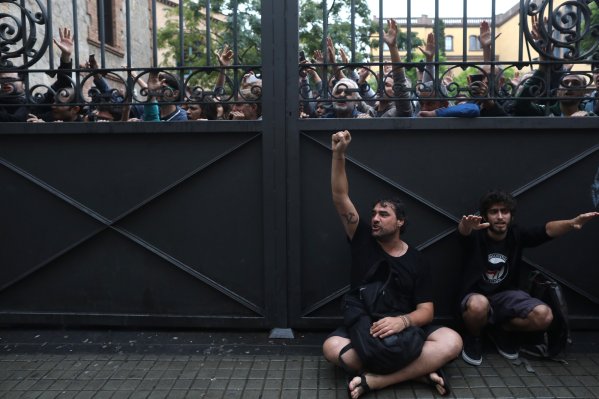 'I Feel Anger I Never Had Inside Me.' On the Ground with Catalonians Fighting to Vote
Next Up: Editor's Pick