Tuesday marked President Trump’s first visit to Puerto Rico, which was ravaged by Hurricane Maria two weeks ago. During a stop at Calvary Chapel in San Juan, he came face to face with some of the U.S. territory’s residents in need of relief.

Perhaps drawing on his reality TV experience, he launched several rolls of paper towels into a crowd of residents, some of whom caught the supplies, some who didn’t.

People were quick to capture the action shots, and it wasn’t long before it was a meme.

A news editor couldn’t wait for the meme machine to go to work.

Some felt it was a distateful way to distribute supplies.

Others found the scene quite dark.

As of Tuesday afternoon, the Photoshop battle was just getting started, with one user riffing on his use of superlatives, captioning this edit job of Trump shooting a basketball at a football goal with the line “I play the best sports.”

The President has faced criticism from Ted Cruz and others for his response to Puerto Rico. The President of Oxfam America, an international organization dedicated to alleviating poverty, announced its involvement in the relief effort, saying the U.S. government was too slow to respond. 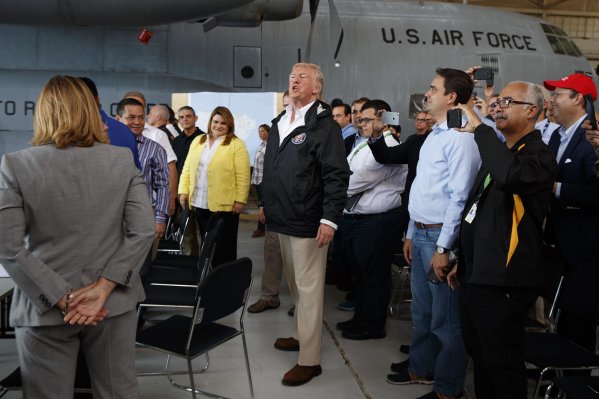 Trump: Maria Not a 'Real Catastrophe' Like Katrina
Next Up: Editor's Pick