President Trump praised officials for the disaster relief effort in Puerto Rico following Hurricane Maria, noting that the death toll was relatively low in comparison with past events like Hurricane Katrina.

“Every death is a horror, but if you look at a real catastrophe like Katrina, and you look at the tremendous— hundreds and hundreds and hundreds of people that died— and you look at what happened here with really a storm that was just totally overpowering, nobody’s ever seen anything like this,” Trump said during a briefing as part of his visit to the island Tuesday. He turned to Puerto Rico’s Governor, Ricardo Rossello, who was sitting next to him, and asked him to confirm the death toll.

When Rossello told him it was 16, Trump was praiseworthy.

But Puerto Rico Public Safety Secretary Héctor Pesquera has pushed back on these figures. He told Omaya Sosa Pascual, a reporter at the Center for Investigative Journalism, that he believes the number of fatalities has exceeded 16. It is unlikely, however, that the death toll from Hurricane Maria will surpass that of Hurricane Katrina in 2005, which led to an estimated 1, 833 deaths, according to figures from FEMA posted by CNN.

The President’s visit to Puerto Rico, which is slated to last a little over five hours, comes just days after he criticized San Juan Mayor Carmen Yulín Cruz after she asked the U.S. government for more resources. Trump wrote on Twitter that some officials in the U.S. territory want “everything to be done for them,” although he did praise Rossello and Congresswoman Jennifer Gonzalez-Colon. 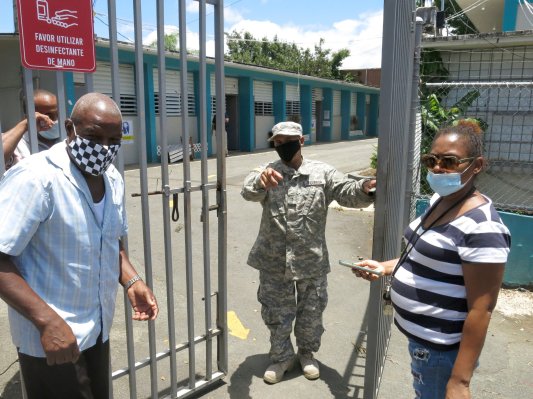