Netflix’s Stranger Things is totally addictive. Nostalgics, escapists, mystery-lovers, sci-fi nerds and Eggo aficionados alike are all tuning in. And no wonder: In the movies, superheroes have taken the place of small town heroes reckoning with otherworldly monsters. Matt and Ross Duffer, the identical twin brothers who created Stranger Things, have proven there’s an appetite for heroes on the small screen.

Fans of Stranger Things will probably take no time at all to zip through the third season, which will premiere on Netflix on July 4 — just in time for an Independence-Day binge. And then they’ll like have to wait another whole year — if not longer — to find out what happens to Eleven, her cohort of sidekicks and whatever else emerges from the Upside Down.

Luckily, it’s easy to find other shows like Stranger Things. The Duffer brothers have spoken at length about the inspiration they pulled from the Steven Spielberg films and Stephen King novels they grew up consuming. They’re not alone: a number of TV shows like Stranger Things employ similar narrative devices and spooky vibes. Plenty of other television series and movies chronicle the creepy happenings in American suburbia.

If you’re looking for something to hold you over after your next binge, here are the movies and shows like Stranger Things you should watch next.

David Lynch’s recently revived cult series belongs in the world of adults, but the Duffer brothers certainly borrowed from the show’s eerie vibe. Lynch often abandons his central mystery — who killed Laura Palmer? — to explore the supernatural in a non-linear and often bizarre manner. Twin Peaks has inspired a number of recent shows like Lost, Fargo and now Stranger Things.

Looking for shows like Stranger Things on Netflix? This sci-fi anthology series that looks at the all-too-real risks of technology (“black mirror” refers to that black, dark screen on our phones, televisions and computers) might be your best best. Some episodes are satirical and funny, while others are downright horrifying.

Where to Watch: Netflix (free with subscription)

If the kids of Stranger Things — besides the Nancy-Steve-Jonathan love triangle — had raging hormones, the show might look a lot like Riverdale. The CW series may be based on the wholesome Archie comics, but the show maintains an eeriness worthy of the Duffer brothers. Now in its second season, Riverdale hasn’t ventured into the supernatural — yet — but it certainly shares the same a darkness with Stranger Things.

David Duchovny and Gillian Anderson are seen in The X-Files in 1995.
FOX—Getty Images

The iconic 1990s show dealt with the sort of things one might find in the Upside Down. If you’re looking for a show like Stranger Things to occupy you the rest of the year, there are a whopping 10 seasons of the series about two FBI agents, Mulder and Scully, who investigated unexplained phenomena in the world — not unlike policeman Jim Hopper and mom Joyce Byers at the end of Stranger Things.

Think of this show as the adult version of Stranger Things. The Netflix series that launched its first season last year begins when a missing blind woman returns home with her sight intact. Like Stranger Things, the first season is about a mystery that might involve another dimension.

Where to Watch: Netflix (free with subscription)

Another show that drew from Twin Peaks, M. Night Shyamalan’s Wayward Pines centers on a strange rural town in which all the residents behave in a rather peculiar manner. Matt Dillon’s Ethan Burke stumbles on Wayward Pines and begins to uncover the reason for its residents’ hysteria — and occasional turns to violence. The Duffer brothers got their start on the series, writing and producing a few episodes.

The Duffer brothers have said that they were inspired by this film adaptation of Stephen King’s novel about a group of boys on the hunt to find the body of a missing boy. Rob Reiner’s film is more tense than it is outright scary. But, like Stranger Things, the film hinges on the incredible chemistry among its cast members, including a young River Phoenix and Wil Wheaton.

The beloved 1982 Steven Spielberg film is another major inspiration for Stranger Things. The monster in question is not the extra-terrestrial being but humans themselves, rendered inhuman by their nightmare-inducing hazmat suits. Our heroes, of course, are innocent kids willing to hop on their bikes and seek out adventure. Sound familiar?

Before he took on Star Wars, J.J. Abrams cut his teeth on this nostalgic sci-fi film that owes a debt to its producer, Steven Spielberg. Super 8 is set in 1979 and named for the camera that a group of small-town kids use to film their budget monster movie —until the real monster invades their town. It finds that perfect balance between sweetness and scare that has won over Stranger Things fans.

With Midnight Special, Jeff Nicols (Mud, Loving) wrote his own love letter to nostalgic Spielberg films. A father (Adam Driver) teams up with a cop to try to keep a cult from snatching away his strange and powerful son.

Close Encounters of the Third Kind (1977)

You’ve probably guessed by now that just about every Steven Spielberg film from the 1970s and 1980s could be on this list. During that era, the director revolutionized the suburban fantasy genre. Until that moment, when aliens or monsters landed in a small town, the townspeople met those threats with awe and fear. Instead, Spielberg imbued them with hope.

Warning: This movie is way more disturbing than Stranger Things. It focuses on a disturbed teen (Jake Gyllenhaal) who commits a series of crimes on the orders of an imagined man with a rabbit head. But just like Stranger Things, the movie is set in 1980s suburbia and draws equally from King and Spielberg. Richard Kelly and the Duffer Brothers were playing with the same toys, but came up with two very different games. 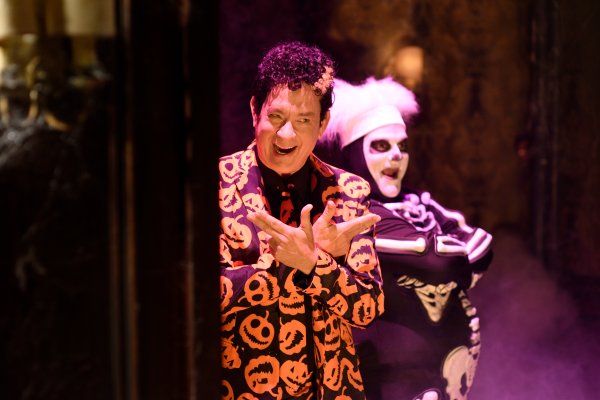 Here's Who Was Meant to Be Mrs. David S. Pumpkins
Next Up: Editor's Pick