Meet the Chicago Pastor Helping Puerto Rico: 'The Church Will Rise Up'

When Pastor Wilfredo De Jesús asked his congregation on a recent Sunday if they had any family members in Puerto Rico, nearly 90% of the hands went up. So it’s no surprise that the Chicago pastor is helping lead private aid efforts on the island.

De Jesús leads New Life Covenant Ministries in Chicago’s Puerto Rican neighborhood of Humboldt Park, a church of 20,000 people that is the largest Assemblies of God church in the U.S. He also supervises some 200 churches in Puerto Rico in his role as an executive for the Assemblies of God denomination.

He moved quickly after Hurricane Maria struck. His team worked with local churches to establish a distribution center in Bayamón, about 20 minutes west of San Juan, and to set up three distribution hubs across the island.

“While the government is figuring this out,” De Jesús told TIME as he boarded a flight to Puerto Rico on Monday, “the church will rise up.”

Last week, De Jesús sent his first team down to the island. They sent 29 pallets of water, food, generators and other supplies on a United Airlines flight, thanks to space donated by the airline, De Jesús says. Local Puerto Rican community organizations in Humboldt Park all contributed, including the National Museum of Puerto Rican Arts and Culture and the Puerto Rico Committee, as well as Illinois Governor Bruce Rauner’s office and Joyce Meyer Ministries.

The goods landed in Puerto Rico, and the team rented trucks. Driving is possible, he says: “It can happen if people get together and stop putting their agenda against the poor,” De Jesús says.

Like his parishioners, De Jesús, who was named one of the 100 most influential people in the world in 2013, also has personal connections to the tragedy. New Life Covenant also has a sister church on the island, Connected Life Church in San Juan. De Jesús himself is Puerto Rican, and his elderly in-laws live there.

He said hopes the mayor of San Juan, Carmen Yulín Cruz, will work more closely with religious groups. He texted her last week, he says, but she has not responded. “You are a mayor of a big city, I am a little pastor in Chicago, and I was able to get pallets to people,” he says. “This bickering going back and forth to our president, it doesn’t help.”

He added that he has little time for the political back and forth.

“There’s a certain few that want to stir up the pot and make this a racial issue,” he said. “We’ve got to rebuild.”

Every week for the next three weeks, De Jesús will send in a new team to replace and refresh the previous team. A new team of 12 arrives on Wednesday. Democratic Sen. Dick Durbin of Illinois has also been helpful, connecting his team with the national guard and with Puerto Rican officials.

“We are bypassing the political stuff, the government,” he says. “This is hogwash, we are one of the greatest nations on the planet and our citizens are suffering from not having water.”

Other Hispanic evangelical and Pentecostal churches have also been active in the relief efforts.

The National Hispanic Christian Leadership Conference, which represents some 40,000 Hispanic evangelical churches and is led by Samuel Rodriguez Jr., who prayed at President Trump’s inauguration, has called on U.S. churches to each support a church in Puerto Rico for a year. It is also planning to send a cargo plane of supplies from New York to the island, and to host benefit concerts with Christian musicians to raise money for relief efforts. 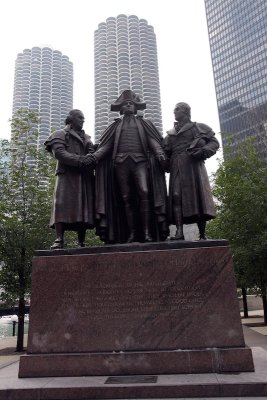 George Washington and the Real History Behind a Yom Kippur Legend
Next Up: Editor's Pick