In the wake of the deadliest mass shooting in U.S. history, advocates of stricter gun control are criticizing a Republican bill to make it easier to buy silencers.

As news still trickled in about the Sunday night’s shooting at Route 91 Harvest Festival at the Mandalay Bay in Las Vegas, former Secretary of State Hillary Clinton was one of a number of gun control supporters who raised concerns about the proposed legislation.

“The crowd fled at the sound of gunshots,” she tweeted on Monday morning. “Imagine the deaths if the shooter had a silencer.”

The bill, known as the Sportsmen’s Heritage and Recreational Enhancement Act, is a large package that nominally serves to “enhance opportunities” to hunt and fish on federal land. But it also includes provisions that will abbreviate the costly background check required to buy suppressors, often popularly referred to as silencers. State and local taxes and registration requirements on these devices would also be nullified.

The effort to deregulate suppressors is a pet project of Rep. Jeff Duncan, a Republican from South Carolina, who says that he wants to help American hunters avoid hearing loss.

“This legislation is about safety – plain and simple,” Duncan said in a statement when introducing the suppressor bill that was folded into the SHARE Act. He noted that his own hearing “has been damaged because of gun noise.”

Despite the “silencer” name or the depiction in TV and movies, suppressors do not make gunshots silent. Even with a suppressor in place, an AR-15 rifle is roughly as loud as a jackhammer.

Still, debate over the measure was halted this summer, after House Majority Whip Steve Scalise was gravely wounded in a shooting at a congressional baseball game in June. Scalise returned to the House floor last week to applause; afterwards, House Minority Leader Nancy Pelosi criticized House Republicans for returning to the silencer debate so shortly after his return.

The bill was expected to come up for a vote as soon as this week. 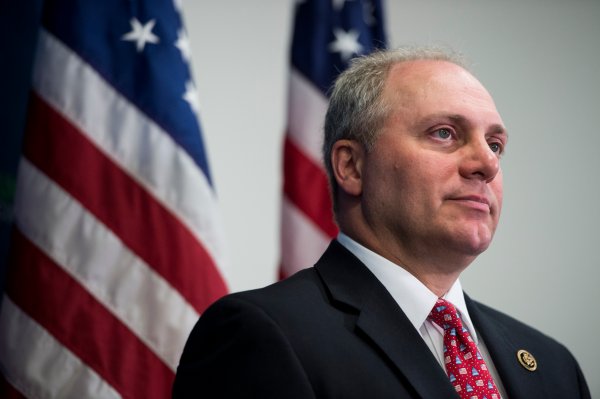 'We're Not That Far Apart.' Steve Scalise Hopes for Political Unity After Near-Death Experience
Next Up: Editor's Pick