'I Feel Anger I Never Had Inside Me.' On the Ground with Catalonians Fighting to Vote

For ninety minutes, the crowd surged outside the Industrial School of Barcelona, each of the 1,500 waiting to cast a simple yes-no vote for an independent Spanish Catalonia. The wait was long, but not when compared to the years it had taken to come to this moment.

As they waited on Sunday morning they chanted “votarem!” or “we will vote!,” sang the region’s melancholy anthem, and cheered at every opportunity. Hundreds of these people had stayed the night to “protect” the voting station from police, and the surrounding cafes and pastisserias were full of people resting their eyes.

At one moment a drone passed over, and the crowd waved and hooted in exaggerated cheeriness at its cameras. Only these and police choppers have been seen in the sky here since the government closed the airspace on Friday. And still, nothing happened.

The Spanish government had cut Internet access to the school, leaving facilitators unable to sync data over the network. The tactic was just one part of a heavy-handed effort by the minority government of Spanish leader Mariano Rajoy to obstruct a vote ruled illegal by Spanish courts.

Finally, organizers decided they had solved the problem: log the data and back up later. Voters were slowly allowed to enter the station, the elderly and disabled first. Some among them may have experienced the language and cultural institutions of Catalonia repressed under Spain’s dictator Franco, who ruled the country from the late 1930s to his death in 1975.

Spanish riot police form a security cordon around the Ramon Llull school during the Catalan independence referendum in Barcelona on Oct. 1, 2017.
Alberto Estevez—EPA-EFE/REX/Shutterstock

The Catalans had sought independence for long before Franco. The state picked the wrong side in a war of succession for the Spanish crown between Philip V and the Habsburgs in the 18th century. The Nueva Planta decrees – seen as “absolutism” by today’s activists – charged Catalonians with “sedition” and subsumed the territories and institutions of the Crown of Aragon into what is today’s Spain.

Two hundred or so years on, charges of sedition have again been thrown at Catalonians. Leaders of the secessionist movement here in Barcelona were placed under arrest last week, as the Spanish authorities attempted to suppress the vote. But that was only the beginning; on election day, would-be voters outside the Industrial School of Barcelona gasped as people on Whatsapp shared increasingly shocking images of violence committed by Spain’s National Police.

They played and replayed scenes of violence uploaded to social media that was baroque in its variety; old women with bloodied faces, old men hurled to the ground, police charging straight through peaceful crowds. Elsewhere, rubber bullets were fired, and tear gas released.

Josep Solé, a student paramedic, had been carrying ballot boxes to Balmes College near Barcelona’s coast from 7am. Shouts and screams outside alerted him to the arrival of the National Police shortly after the polls opened. They entered by force, he says, took the boxes and tried to drive their cars through a crowd, which shouted “you shall not pass!” before they got away. Following reports of more police, Solé then sped to nearby Ramon Llull school where his father was voting. “I couldn’t find him. It was very scary. Then we were reunited.”

A girl reacts as Spanish National Police push away pro-referendum supporters outside the Ramon Llull school, assigned to be a polling station by the Catalan government, in Barcelona on Oct. 1, 2017.
Emilio Morenatti—AP

Despite scenes like this playing out across Barcelona, 2.26 million of the region’s 5.3 million residents apparently voted. At midnight — far sooner than seemed feasible given the chaos in which the referendum had been held — a result emerged: 43% had participated and 90% of these had voted for independence. At least one report was received of a non-resident voting, with voter rolls unavailable amid communication outages. Creating an air of invalidity was exactly what Madrid sought to achieve.

And yet, to many Catalans, there is a sense that, by allowing the violence, Rajoy’s government has lost the argument. Deputy prime minister Soraya Saenz de Santamaria defended the “firmness and proportionality” of police action, a claim that did not match with what most people had seen.

This has emboldened Catalan President Carles Puigdemont, from the centre right Catalan Democratic Party (PDeCAT) to follow through on his promise to declare an independent republic in 48-hours. The region has “earned the right” he said.

A declaration of independence would throw the country into a constitutional crisis and, with the National Police and even more notorious Civil Guard still in the region in their thousands, serious threats to civil order remain. Rajoy was defiant after Puigdemont’s speech, claiming no referendum had been held and blaming the unrest on the Catalan government.

To unionists, Puigdemont has handled the situation irresponsibly. Regional leaders approved the referendum legislation at short notice with no arguments made for “no”, they say, and in clear contravention of the 1978 constitution approved by 90% of Catalans that affirmed “the indissoluble unity of the Spanish nation.” One Barcelona student, who asked not to be named, said Puigdemont now intended to “impose” independence.

Yet even those who fought for independence feel sadness, alongside rage.“I feel anger I never had inside me, angry and impotent,” says trainee paramedic Solé. “We need the international community to step in and decelerate things for peace. If it doesn’t happen it could be war. Civil war could be a possibility in 21st century Europe.” 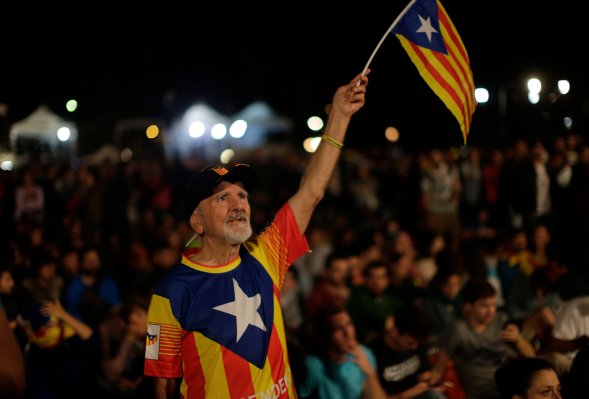 Catalans Voted for Independence. But It's Unlikely to Happen
Next Up: Editor's Pick