The rapper wore a sports jersey emblazoned with “Colin K” on the back and the now-unemployed football star’s number “7” on both sides. While he never vocally acknowledged Kaepernick on the show Saturday, Jay Z has previously praised the NFL kneeling movement Kaepernick started last year.

Since Kaepernick first chose not to stand for the national anthem during games in protest of injustices in the U.S. against black people, hundreds of NFL players have followed his lead. The movement has recently drawn fierce criticism from President Donald Trump, who said kneeling during the anthem was disrespectful to the country.

In a recent interview with BBC Radio 1, Jay Z called Trump a “joke.” “I believe that we are resilient, especially us as black people and especially the culture. We’ve been through so much more than this guy,” Jay Z said. “This guy, I’m looking at him like, man, this is a joke, with all — I can’t even say with all due respect — with all disrespect.” 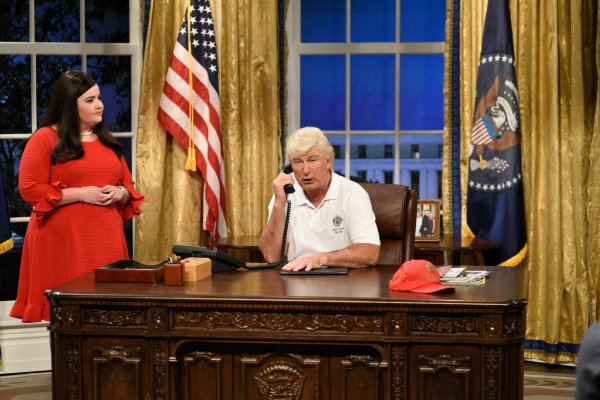 SNL Returns With Trump Takedown
Next Up: Editor's Pick