No, Hugh Hefner Did Not Love Women

Hugh Hefner loved his things: his silk bathrobes, his palatial mansion, his vintage cars. And of course, he would be quick to say, his girls — those interchangeable blondes all below a certain age, with their Barbie-shaped bodies and smiles that never moved their eyes.

Hugh Hefner wasn’t just a rake in expensive (if extremely cheesy) bathrobes; he was allegedly, according to multiple accounts, an abuser. To add insult to injury, he will be buried next to one of the many women he wronged to enrich himself: Marilyn Monroe, whose images helped launch his magazine, but who never wanted them printed in the first place.

Yes, Hefner was on the right side of many of the biggest issues of the modern era: free speech, reproductive choice, gay rights. Playboy pushed the envelope on nudity and obscenity, sex and desire. But it did so within the narrowest of frames: men’s views, experiences, interests, biases and desires. Hefner likely would say that Playboy was a reflection of the male psyche. But it also had a hand in shaping it — and the cultural psyche, too.

What Hefner and Playboy never did was present women as human, or consider us anything like men. Hefner made female sex objects more relatable and accessible — the Playboy centerfold was the girl next door, not the famous movie actress —but this wasn’t so much an elevation as a downward shift: social permission for men to look at all women through the zipper in their jeans, and not even bother to pretend it was otherwise.

Brilliantly, Hefner attached himself to the sexual revolution and the feminist gains that precipitated it. From his vantage point, publishing a magazine full of naked women was just one part of the new culture of “free love.” Except of course the promise of freedom in love was less free for women, who still found themselves saddled with the social expectation of being sexual gatekeepers, and often burdened and shamed by any pregnancies that resulted.

And women didn’t have equal access to sexual pleasure, either – a dynamic Hefner helped to foster. While “free love” meant that men increasingly faced lower barriers to sexual access, it did not mean those same men tried to sexually please and cater to the women they had sex with, nor take responsibility for any unanticipated result – an infection, a pregnancy. Hefner advocated for contraception and abortion rights, sure, but because those things benefited men’s sex lives, not because they were necessary components of female freedom. He didn’t fundamentally challenge a view of sex as something women provide to men and that is primarily about male pleasure and experience, with women in a performative role. If anything, he took that existing sexual imbalance and magnified it, creating a brand that is synonymous with sexualized women being gazed at as things a man might want to acquire.

There’s nothing wrong with getting naked or being sexy, and some feminists might argue that Hefner admirably challenged our silly cultural puritanism. But American women have long been expected to be aesthetically and sexually pleasing; Hefner just had them show more nipple. Sexist prudery, which equated a woman’s worth with her sexual choices, was supplanted by sexist objectification, which demanded a woman perform sexiness for male approval, and still punished her if she was too sexual on her own terms. Some deal.

Hefner’s commitment to women’s freedoms is apparent in how he treated the women in his life. The women who lived in the Playboy Mansion were essentially trapped, required to stick to tight curfews, pressured to engage in whatever sex acts their ancient benefactor demanded and plied with drugs (he reportedly called Quaaludes “thigh-openers”) to get them through it. Before she was a feminist leader, Gloria Steinem was a journalist, and one of her stories was about going undercover as a “bunny” at the Playboy Club in New York, where the young women had to follow an arcane set of rules. They were told private detectives may be following them and engaging in workplace sting operations to see if they were breaking any. “Bunnies” were required to undergo an STI test and a gynecological exam conducted by a male doctor of the club’s choice before starting work.

Hefner did terrible things, and got rich off of them. But it’s still hard not to feel a little bit sorry for a man so clearly uncomfortable with himself that he built an empire on a commodified and empty casing of male sexual desire, a man who threw legendary parties to bond with other men over bikini-clad women, and who paid beautiful women to live in his house and have sex with him so he wouldn’t have to be alone. He was a man who didn’t even believe his “girlfriends” would come home at the end of the day if he didn’t make a rule. If Hugh Hefner wasn’t Hef, the founder of Playboy — if he was just Hugh Hefner, the man – all of the things he confused with love would have never come to him. Not the sex, not the girls, not even the men he considered friends.

He built an empire on male desire, but never seems to have been truly desired himself. He sold a new kind of masculine aspiration, of which he was the paradigm. It was the women he claimed to love who bore most of the cost, but now it’s easy to see the price he paid, too, the things a callow and shallow little man will trade for some time in the spotlight next to a blonde with a great rack. How fitting that, in death, Hef doesn’t evoke hope or ambition, but that simplest and most patronizing of emotions: Pity. 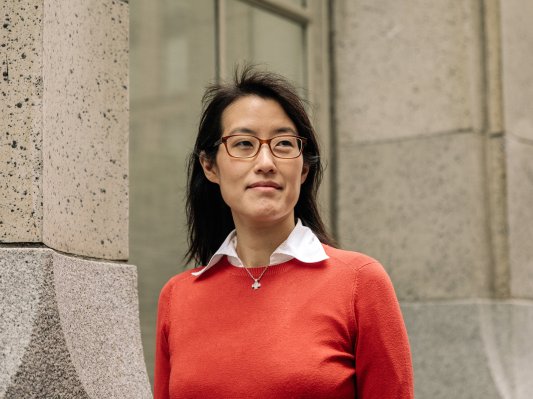 Ellen Pao Has Some Sage Advice for Dealing With Sexism
Next Up: Editor's Pick