The 7 Countries Anthony Bourdain Has Visited Most

By Max Bonem / Food and Wine

Over the past 17 years, Anthony Bourdain has traveled to over 50 different countries while filming his four different TV shows (A Cook’s Tour, No Reservations, The Layover and Parts Unknown). We’ve seen Bourdain go everywhere, from hellacious caves in Jamaica to rural Iran to every corner of the United States, where he’s filmed 68 episodes alone. Here are the 7 foreign countries Bourdain has visited most.

Bourdain’s love of Spain, where he’s filmed seven episodes, runs deep. While his two main focuses in the country have been profiling Feran Adria and shedding light on the Basque city of San Sebastian, Bourdain has also spent time exploring Spain’s two largest cities, along with towns located in the south. Now that his cinematographer Zach Zamboni spends half the year in Spain (after marrying into a Spanish family), expect the Spain episodes to keep coming.

While Bourdain’s interest in Brazil is no doubt tied to his still-growing obsession with Brazilian Jiu-Jitsu, it began with his love for the carioca lifestyle and, of course, caipirinhas. His seven Brazil-focused episodes have taken him to many parts of the country that the rest of the world is almost completely unaware of, including Bahia, Minas Gerais and deep into the Amazon.

While Bourdain has collected a deep knowledge of many individual countries’ cuisines, China is one that he routinely says he will never and could never fully know. It is too vast, too old and too complex, yet he continues to make television there with eight episodes chronicling Mainland China, along with Hong Kong and Macau, so far.

There is no country that Bourdain speaks about more lovingly or romantically than Vietnam. Heck, one of his No Reservations episodes even chronicles his attempt to find and buy a house in Vietnam. Vietnam might just be the country that Bourdain knows best, outside of the US, of course. He’s navigated viewers through the entire country, from Hanoi in the north to the Central Highlands to deep into the southern Mekong Delta.

Bourdain has filmed a few episodes in countries tied to his own family’s heritage, including Paraguay and Uruguay. However, there is no escaping just how French Bourdain truly is. One of the first episodes of his first show, A Cook’s Tour, features him and his brother revisiting their French father’s hometown, where they summered as kids. Additionally, the very first episode of No Reservations, along with the 100th, was filmed in Paris. While he often talks about how he wishes he was Italian, Bourdain has strong ties to his family’s French homeland.

Italy has served as the focus for 10 episodes of Bourdain’s multiple shows, which ties for the #1 spot outside of the United States. In particular, his blatant love affair with Rome is evident in the beautiful production of the last two shows he’s filmed there. Additionally, both his ex-wife and current girlfriend both claim Italy as their home country. While Bourdain will never achieve his dream of actually being Italian, he’s obviously trying to come as close as possible.

Japan is the country that sparked Bourdain’s 20-year travel journey in the first place. Before he ever wrote Kitchen Confidential, Bourdain was sent by his then-boss to Tokyo to help open a restaurant, which was his first proper trip outside the United States. It led to at least 10 trips back over the past 17 years. Bourdain’s love of Japanese food and culture is unabashed and the respect he pays to the country as a whole is simply unmatched. 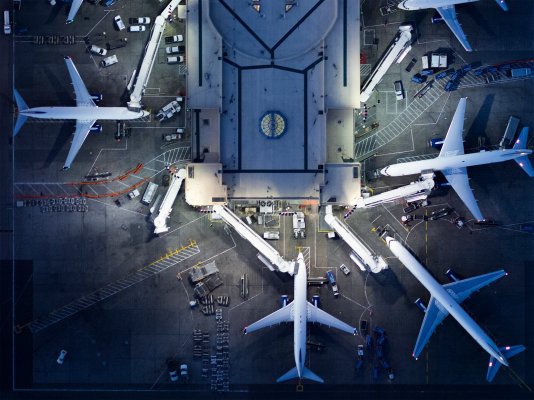 7 Ways to Make Flying Less Stressful
Next Up: Editor's Pick