What Saudi Women Need More Than a Driver's License

Ideas
By Jasmine Bager
Bager is a multimedia journalist who primarily resides in New York City.

Earlier this week, I did something perfectly ordinary: I renewed my U.S. driver’s license. That’s something I couldn’t do in my home country of Saudi Arabia because there is no women’s section at the DMV — there is no such process at all. But after decades of protests, The Kingdom announced on September 26th that it will allow women to drive next summer. And while that will be a welcome change, as a Saudi woman, the change I’m really waiting for is something far more fundamental. I want women to be called by their own names by their fellow citizens.

As it stands now, our names are not spoken. Instead, women are often referred to as a man’s daughter, wife, sister or mother. In fact, a woman’s name is considered so private that it’s embarrassing or shameful to some if they are made to say it. Strangers will call a woman “auntie” or “teacher.” And we are traditionally not addressed at all by men who are not related to us. Just saying a woman’s name in public is rare and sometimes jarring to hear.

So, yes, getting a driver’s license is an important privilege. (Though our nearest male relative will still have to approve most life choices, even if the national laws are changing.) And we can’t wait to take to the roads and pave our own paths. But being addressed by our own names is the next step; and it should have been the first step, in my opinion. A name is what you call yourself, it is your identity, it is your domain. If you’re a woman, it’s quite literally harder to make a name for yourself in the Arab World.

But as it is with many social mores and cultural rules, including the right of a woman to get behind the wheel, the internet may undo centuries of tradition. Platforms like Facebook, Twitter and Instagram are transforming the way men — and women — present their identities and their stories to the world far beyond the borders of their own community or country. Online, men and women can amplify their messages and take part in conversations which are shaping the women’s movement in real time. For as long as Twitter has been at the fingertips of Saudi women, many have been taking to Twitter to normalize driving and reclaiming the narrative that women don’t care to drive. And with the high consumption of social media connectivity in the Arab World and a large percentage of the population being under the age of 30, it’s entirely possible that this generation’s women will be able to reclaim their names as well as drive themselves to work.

Depending on your perspective, this is either a sign of progress or a questionable development. Handing WiFi-enabled devices to each Arab girl to create a digital profile for herself is probably every Baba’s worst nightmare when it comes to his daughter. (And I’m sure there are parents in the U.S. who would say the same.) Now, there are Arab women who have followers by the millions, showing off their outfits and their personalities, with their names splashed all over the web. These social media influencers are proudly claiming their place in cyberspace, even if they can’t in real life.

Meanwhile, global organizations like U.N. Women are tapping into social media to poke at the boundaries of change in the Arab world. In 2015, they asked Egyptian men a seemingly simple question: “What’s your mother’s name?” as part of their #MyMothersNameIs initiative. The very question was mortifying to some, while others responded with giggles. “If someone knew our mother’s name, we used to sob when we were kids,” an older Egyptian man reveals to the camera. “Telling you my father’s name is fine, but my mother’s? No,” was the initial shared response. By the end of the video, the men reluctantly reveal their mother’s names and even type it as their profile photo on social media.

Recently, the New York Times reported on a small social media campaign launched by activists in Afghanistan with the hashtag #WhereIsMyName to remind Afghani women to reclaim their names in public spaces. Like Arab women, Afghani women are often also reduced to simply being a mother, a daughter, a wife or a sister.

But despite the pull of Internet culture, it’s not at all certain that it wil be commonplace to hear women’s names on the streets and not just read them in a carefully curated, scrollable stream. We value privacy in the Arab and Muslim world — for good reason. People gossip, and the word around the block could ruin a potential marriage proposal, employment status or the family’s honor — perhaps the most valued attribute to assign to a person.

Arabs take great pride in lineage, which seems to tilt more on the father’s side than the mother’s. If you’re a Saudi father, I already know that all of your children have your name as their middle name. But nobody ever mentions the mother’s name. In Islam, a woman keeps her maiden name for life. Even if she gets married, her father doesn’t give her “away,” as is done in the West, but she gets to join her husband’s family by being the mother of his children or, at the very least, his wife. In other words, she keeps her birth name forever, which might be seen as an empowering gesture, but people still won’t often say it aloud. It’ll only exist in print.

I know that many men aren’t choosing to be blatantly misogynistic by deliberately eliminating women’s names; this is a deeply rooted practice passed down without explanation. It should also be said that not all Arab men want to stick with nomadic traditions. During his reign, the Late King Abdullah of Saudi renamed the second campus of a women’s university in Riyadh with the full name of his aunt, Princess Nourah bint Abdulrahman, which is said to be the largest all-women campus in the world. To name a campus after a woman in Saudi Arabia was a revolutionary thing at the time.

And let’s remember, these kinds of practices and questions over whether and when to use a female name aren’t just an Eastern thing or even an ancient one. Women around the globe sometimes opt not to use their female name because they can be seen as less powerful or less respected. Female authors concealed their real names for centuries, for example. And that practice continues. J.K. Rowling sometimes writes under a male name, and even the name she used to publish the Harry Potter books doesn’t reveal her gender.

Western countries also still used the phrase “maiden name,” which bolsters so many stereotypes and expectations for women. Former presidential candidate Hillary Rodham Clinton famously kept her maiden name after marriage, but was pressured into taking her husband’s last name when he ran for office. And perhaps the best example of all is Amal Clooney, an Arab-British human rights lawyer who not only took her famous husband’s name, but is often referred to as George Clooney’s wife in the press, despite her own glowing credentials — a fact that more than a few columnists have railed against.

This debate may have expanded from the kitchen table to a broader global forum, but so far it’s mostly virtual, at least in the Arab world. Our real mission now is to have that conversation go beyond the screen and into the streets and houses of government. The question is, can we, will we and should we enable women and lift the stigma or shame by simply sharing women’s names in public? We’ll find out. Allowing women the option to drive themselves in Saudi is going to open up doors but my hope is that it’ll open up minds, too. I want men to proudly address a woman and say her name to her out loud, instead of merely replying to her social media handle in silence. This is about equality and about making women fully present in the community.

In Cuba, where my mother is from, children combine both of their parents’ last names as their own. First, it’s the father’s last name, then the mother’s. As a Saudi-Latina teenager, I decided to adopt that Latin tradition in unofficial documents. It’s a small gesture, but helps me remember that I am the daughter of both of my parents. I want to be reminded, at least virtually, that I attribute myself to the two people who birthed me. I belong to my father, as well as to my mother.

But really, like all women, I belong to myself. 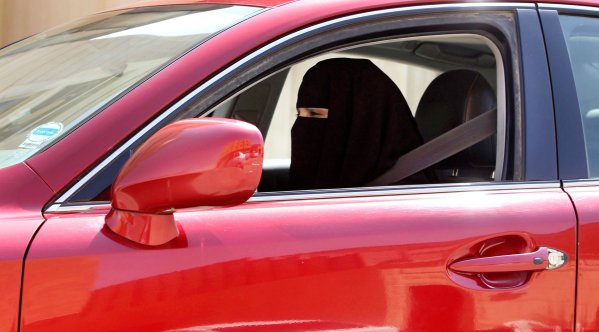 Saudi Women In the Driver's Seat
Next Up: Editor's Pick