‘We Deserve More Help.’ Puerto Ricans Rely on Each Other While Waiting for Aid

After a week without help, Luis DeJesus got out the white paint. “S.O.S.,” read the letters he brushed onto the asphalt entrance to his housing complex. “NECESITAMOS AGUA/COMIDA.”

“They haven’t brought anything to us,” DeJesus said Thursday afternoon, as his wife and three children headed down the drive from the house they remained in, even as the storm surge from Hurricane Maria on Sept. 20 brought the ocean up to their thighs. “I lost everything. We haven’t had food or water for seven days. The governor passed through here. He didn’t stop. He just went to the beach for some pictures and left.”

The beach is just across the road. This is the eastern coast of Puerto Rico, not far from where the eye of Maria made landfall. DeJesus pulled out his phone and played a video of the water rising inside his house. “I have gas to cook, but I don’t have food,” DeJesus said.

As he spoke, a white Toyota Highlander swung into the drive. Three doors and its hatchback popped open, and a handful of young people ran over with white plastic bags. Inside was rice, canned sausages, cookies. There was a bag of bottled water.

“We’re a non-profit Puerto Rican group of young people,” said a slender young man in a ball cap. He identified himself as Jorge Pagan, executive director of Puerto Rico Cambia, or “Change.”

Pagan said his group has seven collection points around the island, and a church in San Juan brimming with provisions. But it was not allowed to make more than the token distributions they had just delivered to DeJesus, like an answered prayer. “The problem that is happening,” he said, “is the government is taking control of everything.”

At a news conference in San Juan on Friday morning, one U.S. official after another acknowledged that the aid response appears sluggish. “It’s not nearly as fast as everybody wants us to do,” said John Rabin, regional director of FEMA, blaming the comprehensive damage of the fifth-most-powerful hurricane ever to strike the U.S.

Addressing the containers of private aid piling up at the port, Gov. Ricardo Rossello said the government would buy their contents and distribute them—though the U.S. official in charge of coordinating the federal response said that the supply chains required to do so have yet to be established.

“Commodity delivery–that has been a challenge,” said the official, Alejandro de la Campa, who said it was the government’s top priority.

When the general in charge of the 4,600 U.S. troops now in Puerto Rico stepped to the microphone, he kept it short. “This response is going to take time,” Lt. Gen. Jeff Buchanan said.

President Trump plans to visit the island on Oct. 3.

Meanwhile, back on the coast, at least DeJesus’s family had been served. “I feel happy now,” said his wife, Yennifer Ortiz. “I have three kids.” But there was nothing for the dozens of other homes in their complex. Just down the road, a National Guard unit was clearing debris from the streets, but offering little else.

“They only gave us two bottles of water every two days. They’re not distributing any food,” said Bernarda Vazquez, 59, who after being evacuated the day before Maria hit had moved back into her two-room house, a block and a half from the water. She said the damage—the toppled buildings closer to the sea, a car that had drifted to the curb in front of her house, its interior caked with muddy sand—was worse than Hurricane Hugo, which struck this island of 3.4 million people in 1989.

“We didn’t have electricity for two months, but everything happened fast because FEMA acted fast,” Vazquez recalled. “You can’t compare the disasters because this was so much worse. They’re acting too slow, but I’m not bothered because the whole island was in danger.”

Not everyone is so understanding. Across the street, Gloria Viera leaned on the rake she had been using to scrape her belongings out of her house.

“We haven’t received any aid,” she said. “A couple of days ago the National Guard brought one bottle of water per person.”

“We have no help,” said her husband Sammy Pagan, 47. “We’re working, and the community is helping out. That’s what I’ve seen.”

The spirit of community does stand out here. Police appear to be where they need to be: directing traffic under darkened traffic lights, or, in a Mad Max touch, escorting tanker trucks bearing precious gasoline to the stations where cars queue for blocks, their drivers often waiting five hours to fill up. But where an immediate need appears, ordinary people step right up, taking charge of traffic outside one of the few open supermarkets or acting as flaggers around streets blocked by debris (which, after more than a week, is taking the shape of manageable piles). “Together As One” was the message painted onto a tattered Puerto Rican flag draped over a shuttered hotel in San Juan.

It’s the government response that appears to be lagging. For all the aid arriving on the island—and the hundreds of officials that have turned the San Juan convention center into an air-conditioned beehive—it is very hard to find any out in the countryside. In a four-hour drive around the island’s northeast section, a TIME reporter saw only a truck dispensing potable water and just two crews from the Puerto Rico Electric Power Authority.

Left on his own in his ruined living room, Sammy Pagan worked to keep a brave face. He had spent the worst hours of Maria with his entire weight braced against the door of an inland house where his family had taken refuge. “Those were two hours in my life of: ‘Please, morning come, morning come.’ Because in the light, you can see what’s happening. But in the night, it’s the sound. It’s like the hurricane is talking. “

The aftermath has not been great either. Pagan and his wife have pushed household belongings into the street like garbage, and he worries the factory where he works, which was badly damaged, might not re-open.

“I don’t have a mind for anything else,” Pagan said. “Just cleaning the house. Helping my family.” He paused, lifting his arms up from his side in a hopeless gesture. His eyes watered. “We say we’ll make it together, everyone is helping out. But, wow.

“Some moment, I don’t know when, I need to scream or to cry or something. I haven’t been able to, because of the family. I need to be supportive. But I need to do it. I’m so strained.” 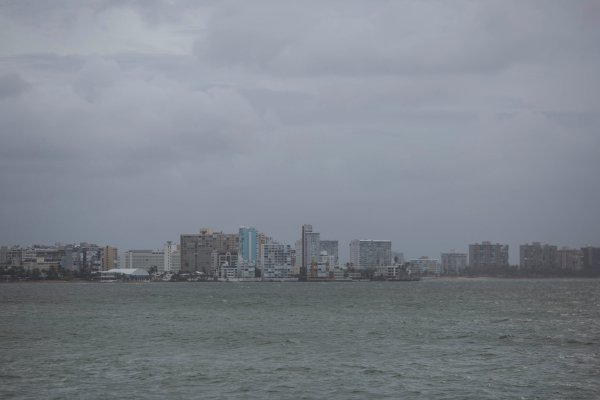 Here’s When Flights to Puerto Rico Will Start Again After Hurricane Maria
Next Up: Editor's Pick