North Korea Says the U.S. Is Lying About Otto Warmbier's Death. Here's What We Know

North Korea on Thursday accused the U.S. of lying about how Otto Warmbier was treated while the American college student was in North Korea’s custody, saying President Donald Trump is trying to fuel “hatred” of the reclusive nation by claiming Warmbier was severely tortured.

North Korea’s accusation comes hours after an Ohio coroner said there were no signs of torture on Warmbier’s body, which was found to be in “excellent condition.” The coroner’s findings, released Wednesday, conflict with new details Warmbier’s parents have given, including the fact that it looked like “someone had taken a pair of pliers and rearranged his bottom teeth.”

“They destroyed him,” Otto Warmbier’s mother, Cindy, told Fox & Friends on Tuesday. “To see how he came home was too much for us. I almost passed out.”

The 22-year-old University of Virginia student returned to Ohio in a coma after North Korea released him on “humanitarian grounds” in June. By then, Warmbier had served more than a year of hard labor in a North Korean prison after allegedly trying to steal a propaganda poster from a hotel in Pyongyang. He died shortly after he made it home.

Here’s what we really know about Otto Warmbier’s death:

What did Otto Warmbier’s parents say?

During a television interview on Fox & Friends on Tuesday, Warmbier’s parents doubled down on their belief that North Korea severely tortured their son. Fred Warmbier described how his son was “howling” and “jerking violently” on a stretcher when they first reunited at an airport. “We heard this howling, involuntary, inhuman sound,” Fred Warmbier said. “He was staring blankly into space, jerking violently. He was blind. He was deaf. As we looked at him and tried to comfort him, it looked like someone had taken a pair of pliers and rearranged his bottom teeth.”

“Now we see North Korea claiming to be a victim and that the world is picking on them,” Fred Warmbier added. “We’re here to tell you North Korea is not a victim. They’re terrorists. They kidnapped Otto. They tortured him. They intentionally injured him.”

On the same day the interview aired, Trump also reiterated in a tweet that “Otto was tortured beyond belief by North Korea.”

What did the coroner say?

Officials still don’t know exactly what happened to Warmbier during the several months he was a captive in North Korea, Hamilton County Coroner Lakshmi Kode Sammarco said at a news conference Wednesday. When he died, Warmbier had brain damage caused by the lack of oxygen to the brain, which could have happened if his blood flow to the brain was discontinued or if he stopped breathing, Sammarco said. But it’s unclear which of those two possibilities was the “root cause” of his death, according to the coroner. “Could that have been torture at the time? We don’t know. We don’t have enough information about what happened to Otto at that initial insult to draw any concrete conclusions,” she told reporters.

The external examination also found Warmbier’s body and skin to be in “excellent condition” for somebody who was bedridden for more than a year, Sammarco said. There was nothing to indicate torture, the coroner added, and there was no evidence of broken bones or teeth. “I felt very comfortable that there wasn’t any evidence of trauma,” Sammarco said.

It’s unclear why there is such a discrepancy between what Warmbier’s parents have described and what the coroner found after an examination. A full autopsy was not conducted because Warmbier’s family objected to it, according to Reuters.

What did North Korea say?

North Korea has denied torturing Warmbier. On Thursday, a North Korean spokesman said the American was given “sincere medical care on humanitarian grounds in consideration of his failing health until he returned to the U.S.,” according to the Associated Press. In a statement, the unnamed foreign ministry spokesman also accused Trump of lying about Warmbier’s condition to put more pressure on North Korea amid global nuclear tensions.

“The fact that the old lunatic Trump and his riff-raff slandered the sacred dignity of our supreme leadership, using bogus data full of falsehood and fabrications, only serves to redouble the surging hatred of our army and people towards the U.S.,” the statement said, according to the AP. 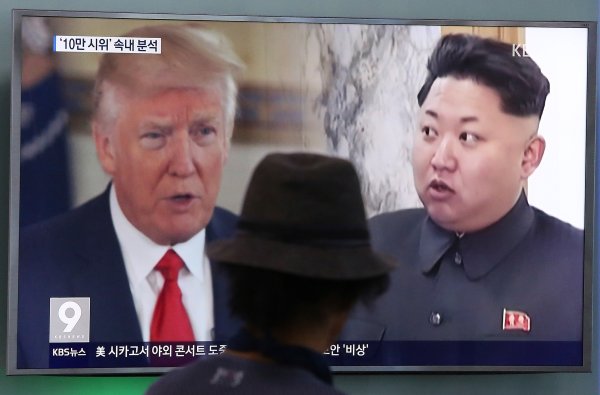 Here Are All the Times Kim Jong Un and Donald Trump Insulted Each Other
Next Up: Editor's Pick