Most Women in Prison Are Victims of Domestic Violence. That's Nothing New

While the mass incarceration of men has dominated the discussion of policing and prisons over the past few years—and rightly so—there’s been a recent shift in thinking about incarcerated women, and not a moment too soon. According to a report by the Vera Institute, women’s incarceration has increased a startling 14-fold since 1970. Like their male counterparts, these women are also overwhelmingly women of color.

Despite the shocking increase in their numbers, however, the specific issues and needs of female prisoners have largely gone ignored. In particular, as National Domestic Violence Awareness Month begins in the U.S., it’s worth noting that the vast majority of women in prison are single mothers who have been victims of domestic and/or sexual violence.

These concerns have rarely been part of prison-reform discussions, and yet this fact is typical of the history of women’s incarceration in our country.

Criminal justice in the American South for decades following the Civil War was meted out unjustly, disproportionately affecting African Americans, regardless of gender. And, thanks to a unique historical record created by women in a Mississippi prison in the 1930s, it’s possible to see that the similarities between women’s incarceration then and now is significant. In both periods, women were more likely to be incarcerated for nonviolent crimes than for violent ones. Likewise, many of the incarcerated women in both cases were victims of domestic and sexual violence whose income was vital to their family household.

The prison in question was a state penitentiary in Jim Crow Mississippi, better known as Parchman. Of the more than 2,000 prisoners there in the mid-1930s, between 60-80 were women, of which only a handful were white. That small group was responsible for sewing all of the convict uniforms and the mattress ticking, canning the food that was eaten by everyone, picking cotton, and even slaughtering cows and hogs that fed the prisoners. There, women left a record of their lives in the form of blues poems and songs. In the early 1930s, Delta journalist David Cohn visited the women at Parchman and provided them with pencils and paper on which they provided details of their lives, their criminal trials and incarceration.

In “My Prison Blues,” for example, Fannie Walden wrote about some of the very same issues that concern incarcerated women today. She laments being separated from her child in the lyric “One poor little daughter in the cold world behind/for home and her love, my heart doth pine.” A later verse explains the reason she is in prison was due to a situation of domestic violence: “The only trouble I’ve given the land/Was defense of myself—just killed one man.”

Nor did the violence stop at the prison gates. Women at Parchman also wrote about the violence they experienced while in prison, sexual and otherwise. One woman, identified only by the initials M.A.V., describes another female prisoner’s child, the product of sexual violence at the hands of the white supervisor of the women’s camp: “Coreanna’s got a baby and he’s got blue eyes, must be the Captain’s, he ain’t none of mine.”

Another prisoner detailed the physical violence at the hands of the man she calls the “Ricketiest Superintendent.” In her “penitentiary blues,” she describes the brutality of prison and thoughts of refuge in the lyric, “Got the ricketiest superintendent, Got the worst sergeant on the farm, and if I make it to the bushes, my sergeant can’t do me no harm.”

Fast-forward to 2017 and we realize that little has changed in the treatment of women in over one hundred years. The vast majority of female prisoners remain women of color. They continue to be victims of sexual violence. Their children are being raised without them.

The difference is that this is not Jim Crow Mississippi. Today, this situation extends well beyond the South. Nationally, as the Vera Institute Report shows, the overwhelming majority of female prisoners are held for nonviolent offenses and most are women of color. Among them, 86% are victims of sexual violence.

The difficulties faced by female prisoners are now attracting the attention of politicians. On July 11 of this year, Sen. Cory Booker (D-NJ) introduced the Dignity for Incarcerated Women Act, or the “Dignity Act,” on behalf of himself and Sens. Kamala Harris, Elizabeth Warren and Richard Durbin.

The bill aims “To improve the treatment of Federal prisoners who are primary caretaker parents.” To that end, the Dignity Act calls for a more generous visitation policy for incarcerated mothers. If passed, it would also prevent restraining pregnant women by shackling them or placing them in strait jackets, among other forms of restraint. Prisons would provide parenting classes and trauma-informed care for those who need it, as well as make basic healthcare products like tampons available. Gynecological care would also be mandatory.

Since July, the Dignity Act has only advanced as far as the Senate Judiciary Committee where no further action has been taken. Given the stark realities of life for incarcerated women, action cannot come soon enough. Our nation can and should do better than to allow Jim Crow-like prison policies to continue unchecked.

Karen L. Cox is professor of history at UNC Charlotte and the author of Goat Castle: A True Story of Murder, Race, and the Gothic South. 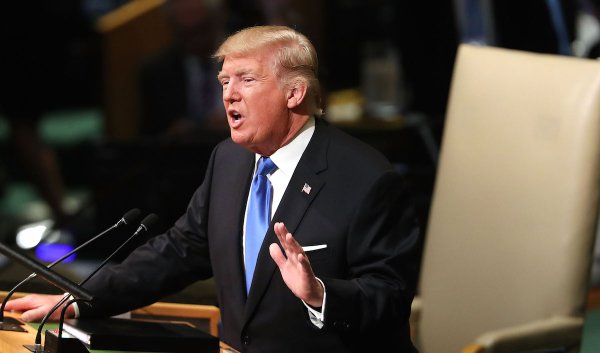 President Trump, North Korea and a Brief History of Nuclear Threats
Next Up: Editor's Pick