How Cardi B Rose to Number One

Last week, Cardi B‘s infectiously raucous hit “Bodak Yellow” bumped Taylor Swift’s “Look What You Made Me Do” from the coveted top spot on the Billboard Top 100. While this achievement would be noteworthy for any artist, it’s especially significant when you consider that Cardi is the first female rapper with no featured artists to hold the spot since Lauryn Hill in 1998. While “Bodak Yellow” has finally nabbed the number one slot, it’s worth noting that the 24-year-old Bronx native, born Belcalis Almanzar, has been making money moves since way before the song picked up. As the song enters its second week on top, here’s what to know about her rise to number one.

Even before she was dominating the charts, Cardi was a worker

The chorus of “Bodak Yellow” includes the lyric, “I don’t dance now, I make money moves/ Say I don’t gotta dance, I make money moves.” This line is a reference to Cardi’s former job as a dancer at a Manhattan strip club, a job she credits with allowing her to build her career as a rapper. In an interview with VladTV, she said that it enabled her to leave an abusive relationship and resume her education. “I was poor as hell. I was living with my ex-boyfriend that was beating my ass. I had to drop out of school. I was living with his mama, two pitbulls in a bedroom. It was crazy,” she said. “A lot of people make [stripping] so negative, but it really saved me from a lot of things. I went back to school.”

She also told Billboard that she uses strip clubs as a litmus test for good music. “If your song is not playing in the strip club, then it’s not popping,” she said. “Seeing the dancers singing to [“Bodak Yellow”] and men throwing money, it feels like I accomplished something.”

She understands the power of the Internet

Cardi rose to fame on the Internet by making hilarious Instagram videos and Vines while working as a stripper. According to The Fader, thanks to her popularity online, she was able to begin making a living from being a social media “influencer.” Her no-nonsense and candidly humorous clips often featured jokes or ruminations on life and love in her loud, fast-paced and undeniably Bronx-flavored accent.

In an interview with VH1, Cardi talked about how social media extended her reach and gave her a broader audience. “Social media, they fell in love with me. The hood was f-cking with me and now the suburbans is f-cking with me, too,” she said. “I would never ever thought that so many people could relate to the things that I say. It has taken me to another world.” Currently, Cardi has nearly 11 million followers on Instagram and more than a million followers on Twitter. Her fans call themselves the “Bardi” gang and have helped to bolster her success. When Cardi was trying to reach number one, she encouraged the Bardi gang to buy, stream and watch her song.

Cardi’s status as a viral star made her a prime candidate to join the cast of the reality show Love & Hip Hop, through which viewers came to know her as a “regular-degular-shmegular girl from the Bronx” who wasn’t going to let a man get in the way of getting her “schmoney.”

While on the show, Cardi’s big personality and witty one-liners quickly made her one of the franchise’s most beloved characters, which she skillfully parlayed into her music. Take, for instance, a now-infamous scene in which she got into a fight with the girlfriend of a fellow cast member and sagely stated that if “a girl have beef with me, she gonna beef with me…FOREVER.” The line became a meme of sorts, which inspired her song “Foreva.”

But Cardi B knew that her endgame was bigger than being a reality TV star and left Love & Hip Hop after two seasons. Just as she did with her job at the strip club, Cardi referenced her time on Love & Hip Hop with a line in “Bodak Yellow,” telling haters that she’s still getting money from the franchise — “another check from Mona Scott” — referencing the show’s producer. After releasing two mixtapes and leaving the show, she inked a deal with Atlantic Records and is expected to release an album this year.

Despite her unconventional journey to number one, Cardi’s stardom is confirmed by the overwhelming support she’s gotten from those in the entertainment industry. She’s earned co-signs from everyone from Drake — who brought her out as a guest during OVOFest to perform “Bodak Yellow” — to Janet Jackson and Beyoncé. 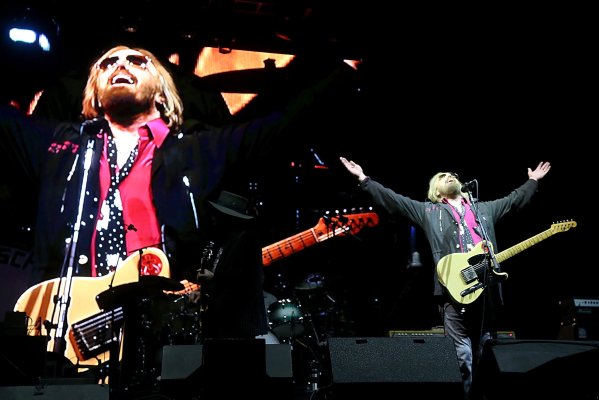 Watch the Final Moments of Tom Petty's Last Ever Live Show
Next Up: Editor's Pick