Republicans Are Optimistic About Tax Reform. But It Could Face the Same Trouble as Health Care

Republican lawmakers gathered with excitement on Wednesday to introduce their proposal for what they described as the most sweeping federal tax reform proposal in decades.

Just a day after the latest failure on their promise to repeal the Affordable Care Act, the change of topic was welcomed, and the members gathered in the Rayburn Room were optimistic about the new proposal.

“I like the energy in the room,” said Republican Sen. Rob Portman of Ohio. “This is a really exciting opportunity… It gets the economy moving and will generate more income, more wages. It’s more jobs, it’s better jobs.”

Endorsed by President Trump in Indiana on Wednesday, the plan is being billed as a drastic simplification of the federal tax system, one that is “built for growth” and “puts America first,” with an emphasis on helping the middle class. But like the healthcare fight before it, the proposal came with a number of unanswered questions that could frustrate lawmakers’ goals.

The blueprint, titled “United Framework for Fixing Our Broken Tax Code,” runs at just nine pages — eight if you subtract the title page — and deals mostly in broad strokes. And the specifics that are there have already engendered skepticism among Democrats and nonpartisan tax experts.

To take one example: the framework calls for reducing the number of income tax brackets from its current seven down to three, taxed at 12%, 25% and 35%. This idea by itself would amount to a tax hike on the poorest Americans, who currently pay a 10% federal income tax rate, and a tax cut for the richest, who pay 39.6%. (It will be up to Congress to decide what the income cutoffs are for each bracket.)

Supporters argue that the bill will include a tradeoff: simplifying the tax code enough that Americans could file their taxes “on the back of a postcard.” That means getting rid of many itemized deductions in favor of a larger standard deduction. But the plan fails to specify exactly which deductions would go, noting only that it will retain incentives for charitable donations and the mortgage interest deduction for homeowners.

Trump has long called for a significant slashing of corporate taxes, and the new proposal delivers on that. It would reduce the current corporate tax rate from 35% to around 20%, earning the proposal the support of conservative House Republicans, and limit the tax rate on small businesses to around 25%, which are currently taxed as individuals.

(It’s worth noting that many of the specifics laid out in the blueprint will likely benefit Trump himself. He owns more than 500 small “pass-through” businesses under the broad umbrella of the Trump Organization that will enjoy a significant tax cut. The plan also eliminates the Alternative Minimum Tax, which often hits Americans making more than $130,000, and does away with the estate tax, which would factor into his children’s inheritance.)

The proposal fails to explain how it will pay for all of this. According to some reports, one proposed strategy is repealing the state and local income tax deduction, a century-old measure that allows taxpayers to deduct the sum they pay in local and state taxes from the amount that is then taxed at the federal level. This will inevitably draw the ire of lawmakers from states that benefit heavily from the deduction — high-tax, generally blue states like New York and California.

“Firstly, it’s an attempt at tax reform, but it’s really just a tax cut. And there’s no doubt in my mind that in its current form, it will likely increase the deficit,” Steve Bell, who served as staff director for the Senate’s Committee on the Budget from 1981 to 1986 and is now a senior advisor at the Bipartisan Policy Center, tells TIME. “By how much? We don’t know. No one can say, because we don’t know the details behind some of these provisions.”

“There has been a real complaint, especially in the Senate, by Republican lawmakers who haven’t participated in this process, now that the best they’re getting is a few pages of really sketchy stuff,” Bell continued. “There are a lot of Republicans who would like to know a lot more about this. I can guarantee you that the final bill — if one even emerges — will be substantially different than this.”

Still, Wednesday was a day for optimism among the GOP. In the eight months that have passed since Trump took the Oval Office and Republicans took the majority in both houses of Congress — the party’s first such trifecta in a decade — the Republican Party has notched zero major legislative victories. Its failures have been loud and public: most recently, the death earlier this week of the last-ditch Obamacare repeal effort known as Graham-Cassidy, which many Republicans clung to until the end as a possible Hail Mary pass on a pledge dating back to 2010.

Conservative experts are bullish. “This is going to be an extremely popular thing, and it will pass before December,” Grover Norquist, the outspoken anti-tax advocate who heads the action group Americans for Tax Reform, tells TIME. “Trump has focused the rhetoric on jobs, jobs, jobs, and this is much more a jobs bill than it is a tax cut bill.”

“I think they’re both difficult, but this is one that attracts more attention and gets people working a little harder,” said Hatch, one of the leading figures in the tax reform effort. “It’s a question of when we bring it up — we can do it now if we have to.”

This isn’t exactly true. For starters, Republicans in Congress must first pass a budget resolution that will allow the Senate to pass a tax reform bill with just a simple majority of 51 votes. (A draft is expected to hit the Senate floor next week.) Only then will lawmakers go to work to hash out a bill deemed palatable.

But Democrats are already on the offensive, decrying the plan as an unjust tax cut for the wealthy. “Their plan is clear: slash rates for the wealthiest among us, and stick the middle class with the check,” Democratic Rep. Tim Ryan from Ohio said Wednesday in a statement.

“Of course we’re taking it seriously. Their healthcare bill was an absurd proposal, and so is this,” one senior Democratic aide tells TIME. “It’s fundamentally a tax cut for the wealthy, and if this remains the framework, it’s hard to expect bipartisan work on it. You can’t tinker around with fundamental flaws. None of this is surprising.” 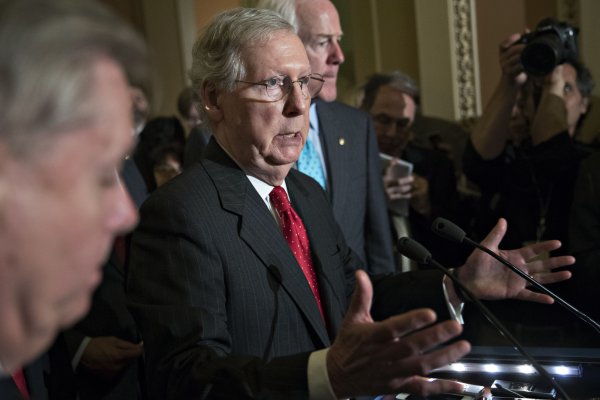 GOP Fight to Repeal Obamacare Is 'Dead as a Doornail'
Next Up: Editor's Pick