The 5 Biggest Announcements Amazon Just Made

Amazon made some big changes to its family of Echo smart speakers during an event held at its Seattle headquarters on Wednesday. Among the new devices it announced are a cheaper Echo with improved audio, a larger Echo that’s positioned as a smart home hub, and a box that turns your Echo into a landline phone. Amazon is introducing these new products just ahead of Google’s event next month, during which the search giant is expected to introduce a miniature version of its own intelligent speaker. Apple, meanwhile, is gearing up to launch its Siri-powered HomePod speaker later this year.

Here’s a closer look at the most important announcements from Amazon’s event.

Amazon’s updated Echo will cost $99.99, a significant price cut compared to its $179 predecessor. The new model should offer better sound quality than the older Echo thanks to a dedicated tweeter and woofer as well as support for Dolby audio processing. The device is about half as tall as the original version and Amazon is selling several shells for it in different colors and styles. The new Echo appears to be a more formidable rival to Apple’s HomePod, which the iPhone maker touted for its audio quality when it unveiled the device in June. The revamped Echo starts shipping next month with preorders starting Wednesday.

Amazon will also be offering a pricier new option called the Echo Plus, a larger device designed emphasize its smart home hub and virtual assistant capabilities. With the $149.99 Echo Plus, you can just say, “Alexa, discover my devices,” to get started rather than having to install separate skills and apps. This setup option works with more than 100 smart home devices, and Amazon is also bundling a free Philips Hue smart light bulb with the Plus. Like the new Echo, you can also preorder the Plus starting Wednesday ahead of next month’s launch.

With the Connect, Amazon is taking another step in turning its smart speaker into a communication device. The $34.99 device works with your existing landline or VoIP phone service, and enables you to call anyone in your contacts list by asking Alexa. Amazon says your home phone number will appear in the caller ID when making calls through the Echo Connect. When anyone saved in your contacts list calls your home phone, Alexa will announce the person by name. The device will be launching later this year.

Although the Echo is meant to be triggered with your voice, Amazon will start selling new buttons that make it easier to play multiplayer games through the Echo. You may, for example, press an Echo button to buzz in during a trivia game being played through the Echo. Amazon says several skills including Buzzer Beater Basketball Trivia with Karl-Anthony Towns and Sounds Fun with Mike Epps will be available later this year. You can buy them in a two-pack for $19.99 this holiday season.

Amazon’s Echo Spot is the company’s second smart speaker to include a screen. But unlike the Echo Show, which was released in June, the Spot has a smaller, round display that makes it look more like a smart alarm clock. It also has a front-facing camera for making video calls, as does the Show, and can connect to your other Bluetooth speakers. It will cost $129.99 and starts shipping in December. 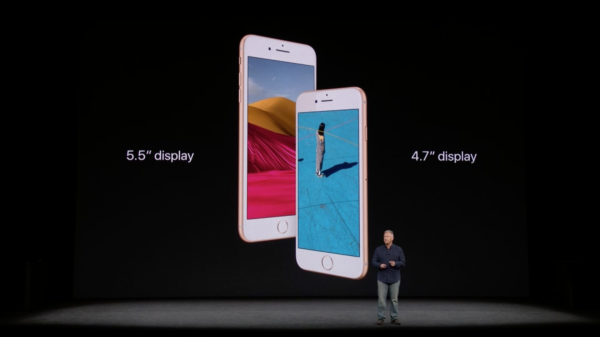 The New Apple iPhone 8 Is Built for Photography and Augmented Reality
Next Up: Editor's Pick