The Dictionary Is Adding An Entry for 'Fake News'

Imagine that it is your job to explain what everyone else means when they use certain words, whether the term in question is escalator or nationalism. That is the task of the lexicographer, the human who watches words spread and tracks the way people use them. You might even call them fact checkers for the English language. Their mission of keeping dictionaries current has always been a challenging one, and President Donald Trump is not making it any easier.

In Dictionary.com’s next update, the online reference will add a definition for the term fake news. And even though Trump is partly responsible for the currency of that phrase, the definition won’t be true to the way he generally uses the term so much as the way it is used to describe alleged attempts by Russia to meddle in the 2016 election. The entry will read like this:

Trump might claim that this definition works just fine — that when he sums up all the work done by CNN, ABC, CBS, the New York Times and the Washington Post as “Fake News!” in a single tweet – this is precisely what he means: that those outlets are producing false stories aimed at discrediting him, Public Figure No. 1.

Although Trump does deploy the term to highlight errors, both the President and his supporters use “fake news” to cast a wide net over plenty of articles that are chock full of truth and facts. In general, the Trumpian version of the phrase functions more as a slur against mainstream media outlets that some conservatives believe are inherently flawed by an unacknowledged liberal bias.

Americans don’t seem to agree on much these days, including the meaning of words, and that goes doubly for politically fraught ones. Even terms like white supremacy are undergoing shifts. While some might hear “white supremacy” and envision neo-Nazis advocating for a white ethnic state, others are now using the term to refer to societies in which white people have historically had rights other groups have not (to vote, to own land) and continue to have privileges others do not. In the former sense, it is an odious vision. In the latter, it’s reality.

Trump has put other words on lexicographers’ watch lists, too — as when he thrust the term “alt left” into the public consciousness after the clash between white nationalists and counter-protesters Charlottesville. It was a complicated linguistic pivot given all the talk about how people should be qualifying the term “alt right,” which can function as a euphemism for hateful racism and sexism as well as an unfair insult to more traditional conservative ideologies. No major English dictionary has added “alt left” to their ranks yet (though some have defined “alt-right.”) That’s because it’s not yet clear whether the term will stick around or exactly how people will be using it if it does.

The same goes for the way that Trump decries “fake” news. “There are two very real senses of fake news out there,” says Dictionary.com’s Jane Solomon, “and we have chosen in our next update to only define one of them.” In part, she says, that decision turned on the lexicographer’s principle of defining what is probable versus what is possible. Many people have been turning to dictionaries to look up a definition for fake news – Oxford says it is one of their most common failed searches these days – and Solomon wants people to get a definition that reflects “the wider understanding of what fake news means.”

Dictionary.com’s choice also reflects lexicographers’ deep commitment to neutrality. They don’t define words because they like them or write definitions that fit their ways of thinking: they do their best to mechanically reflect and distill the ways in which English speakers are using words in daily life. Sometimes that means adding “usage notes” about the context in which a word was popularized or adding a label like slang or derogatory in front of the definition. “A dictionary is not a censored resource,” Solomon says.

But sometimes that commitment means not adding a definition at all. A word’s inclusion in a dictionary confers legitimacy on both words and the meanings that accompany them, which is why defitions are summoned in legal arguments and cited in court opinions. And that is why no respectable dictionary is ever going to write a definition for fake news that simply reads “the failing New York Times.”

Merriam-Webster does not seem to have been inspired by Trump’s usage of “fake news” so far. That reference does not have a definition for the term and has said they’re unlikely to add one because the meaning is self-explanatory: fake news is news that is untrue. So the term doesn’t need its own entry, just as “red car” or “hot day” does not.

Craig Leyland, a senior editor at the Oxford English Dictionary who works on new words, says that they’re keeping a close eye on the phrase but have not broken out their definition-writing pens yet because the meaning is still evolving. The term has been used since the 1800s, he says, and for most of that time, its meaning was obvious, no more than a synonym for “false news” or “spurious news.” But fake news has “gained an extra layer of meaning” since gaining prominence over the last year, he says, “so that now there’s a case for us to define it.”

“The fact is that we have more words that we want to define than we have the resources or time to define them,” says Solomon. “We’re trying to keep up,” she adds, “but these words are sprouting up so fast.” 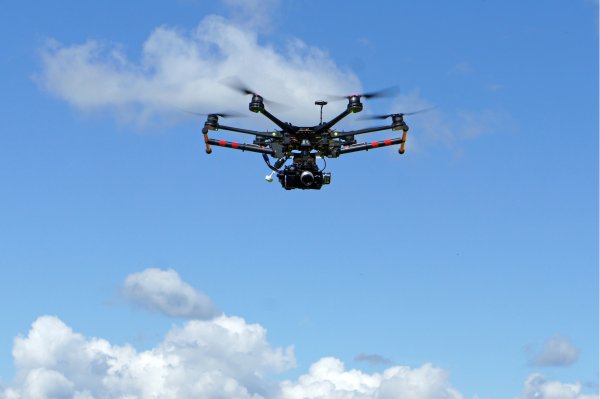 These Drones Could Save Lives in a Disaster Zone
Next Up: Editor's Pick