Kit Harington and Rose Leslie officially tied the knot in June last year, sending fans into a tizzy. Here’s everything we know about the real-life romance between the former co-stars.

It’s unclear exactly when sparks started to fly between Harington and Leslie, but one thing we know for sure is where the two fell for each other — on the set of a little old show called Game of Thrones.

“I fell in love in Iceland,” Harington revealed during a 2016 appearance on The Jonathan Ross Show, referring to the filming location of Jon Snow’s scenes beyond the Wall. “I fell in love with my co-star.”

Leslie was cast as Ygritte — the fiery Widling fighter and love interest of Jon — in the HBO drama’s second season and made her debut in its fifth episode, “The Old Gods and the New.” She was featured as a recurring character until Ygritte was fatally shot in the back with an arrow by Olly — who later also delivered Jon’s (temporary) killing blow — during the season four Battle of Castle Black.

The couple carried out one of the series’ most memorable romances in the span of those two seasons, gifting fans with both that steamy cave scene and their oft-quoted catchphrase, “You know nothing, Jon Snow.”

“Ygritte is the only woman for Jon,” Harington (facetiously) told Us Weekly before the show’s season seven premiere. “Always. There will be no one else.”

Admittedly, their on-screen relationship was pretty much doomed from the start. But in real life, their connection seems to have only grown stronger over time. The pair was first rumored to be dating in 2012 when TMZ released photos of them holding hands at a restaurant.

Harington denied there was anything but friendship between them in several interviews over the next few years, but also openly admitted that he is private about his love life.

“On a serious level, I wouldn’t tell the press if I was in a relationship or not,” he told the London Evening Standard in 2014. “I wouldn’t ever reveal that, because it takes you down a certain road… I have no desire to be courting the press with my love life. It’s not my job, it’s not who I am — and I actually think it’s more fun for everyone to speculate. The minute I start telling people things are true or not true, then it’s just boring.”

More: 10 Unforgettable Times the Game of Thrones Stars Hung Out in Real Life

After being spotted holding hands and kissing in January 2016, they made their public debut as a couple at that year’s Olivier awards. “If you’re already attracted to someone, and then they play your love interest in the show, it becomes very easy to fall in love,” Harington told L’Uomo Vogue about a month later.

The two took the next big step in their relationship this summer when they bought a home in the English countryside — a plan that Harington revealed was in the works during a May 2017 interview with Esquire.

At the time, he declined to offer further details about their history together. “It’s as much her relationship as it is mine and I can’t speak for both of us,” he said. “But yeah, we are very, very happy. So that’s what I’ll say about that.”

On the red carpet of Thrones‘ season seven premiere in July 2017, Harington was a bit more forthcoming about their love for one another. “I think that’s the really special thing about it is that we met on this show and here we are seven years down the line back here promoting season seven,” he told Entertainment Tonight. “I mean it’s mad. It’s such a special thing. I’m so privileged.”

The news that Harington and Leslie had gotten engaged broke on Tuesday, Sept. 26, 2017 when it was reportedly confirmed by an anonymous source. However, the couple waited an extra day to make the announcement official by putting out a notice in the Wednesday edition of The Times of London newspaper.

A Game of Thrones wedding

Harington and Leslie were married at Scotland’s Kirkton of Rayne church on June 23, 2018 in front of their family, friends and, of course, castmates. The reception was held at nearby Wardhill Castle — a property that’s been in the Leslie family for generations.

During a January 2019 appearance on KISS Breakfast, Harington told hosts Tom Green and Daisy Maskell that Game of Thrones was the cause of quite the spat between him and Leslie. “I told my wife last year how it ended, and she wouldn’t talk to me for about three days,” he said. “And she’d asked!”

But in a February interview with Entertainment Weekly, Leslie explained that Harrington actually spoiled season 7 for her, not season 8.

“I genuinely don’t know the ending [of the show],” she said. “He told me the ending of last season and I remember getting a bit uppity about that…He happened to tell me — and this is a spoiler for anybody who hasn’t seen the last season — he happened to tell me that one of the dragons falls into the ice lake, and then we see the dragon being dragged out of the water and the dragon breathes fire — or ice, I can’t quite remember which one it is, I think it’s fire — onto the Wall, and then, of course, that’s when all the [Army of the Dead] can then cross over. So he told me about the dragon and I got rather livid with him, because I said, ‘You weren’t supposed to tell me everything! And that’s a huge piece of information!’ And he’s like, ‘Well, you asked!; And I was like, ‘I know.’”

She went on to say that she also wasn’t as mad as Harington made her out to be. “That was an exaggeration,” she said. “I love that he said three days. Look at him trying to get a soundbite. That’s hilarious!”

Some good old trolling on SNL

Rose Leslie was one of the Thrones cast members to crash Harington’s opening SNL monologue this year with a tough question. “My question is, ‘What are we going to do for money now? I mean, we didn’t save anything, and you kept telling me, ‘I’m the King of the North. We can order Uber Eats every night.’”

And then she got down to a popular question. “Wait…one more question: How quickly can you grow back that beard?” 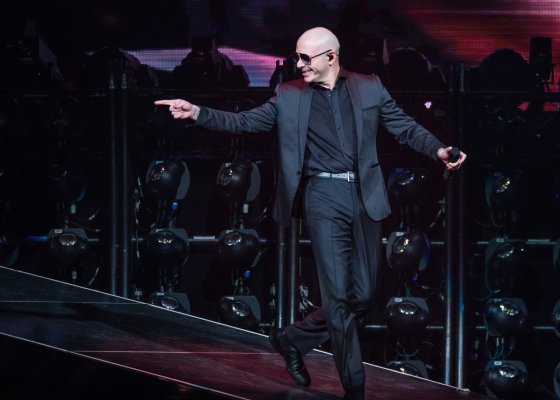 Pitbull Sent His Private Plane to Bring Puerto Rican Cancer Patients to the Mainland
Next Up: Editor's Pick