President Trump Just Deleted Tweets About Luther Strange. Is He Allowed to Do That?

Following Roy Moore’s victory in the Alabama Republican Senate primary on Tuesday, President Trump deleted tweets from his personal account about Sen. Luther Strange, whom he had endorsed in the primary.

The tweets, which were archived by ProPublica, urged Alabamans to “finish the job” and “vote today for Big Luther.” Trump also deleted an inaccurate tweet telling Moore to win in November; the general election is in December.

This is not the first time Trump has deleted tweets, as ProPublica’s archive shows, though previous deleted tweets were largely because of typos and spelling errors. But it once again raises the question about the legal implications of a Commander-in-Chief deleting tweets, and whether it violates the Presidential Records Act of 1978, which mandates that the President and Vice President preserve all records.

Experts, including one suing Trump for his pattern of deleting tweets, say this time was not a violation because his tweets were about national politics rather than the presidency.

“I’m not convinced that’s a violation [of the Presidential Records Act],” said Anne Weismann, chief Freedom of Information Act counsel for the accountability groups Citizens for Responsibility and Ethics in Washington, which has filed a lawsuit claiming Trump’s deleting of tweets violate the PRA.

The Presidential Records Act mandates that a President’s official records must be preserved during his or her time in office, and are subsequently handed over to the national archivist, who would make them available to the public after the term ends. There are no explicit references to social media accounts in the act — although one Congressman, Rep. Mike Quigley, introduced an act in Congress that would amend the PRA to include it — and no cases have been litigated about it because Barack Obama was the first President to use Twitter.

However, the list of materials designated for preservation in the PRA include digital forms of records, which some legal experts believe is sufficient grounds for arguing that deleting a tweet is a violation.

However, the PRA states that the President does not need to preserve personal records, which include “materials relating to private political associations, and having no relation to or direct effect upon the carrying out of constitutional, statutory, or other official or ceremonial duties of the President.”

In other words, Trump’s tweets about Strange don’t necessarily relate to his work as President, but as the de facto head of the Republican Party — so he doesn’t have to preserve them.

An attorney who worked for the White House during the Obama Administration echoed these sentiments, explaining that Trump deleting tweets about Strange is a different situation legally than hypothetically deleting something like his recent tweets about Puerto Rico. “That would be a violation of the Presidential Records Act because those tweets were obviously official,” the lawyer explained.

Both experts cautioned however, that these series of tweets were atypical, and Trump’s habit of deleting tweets is a violation of the PRA. 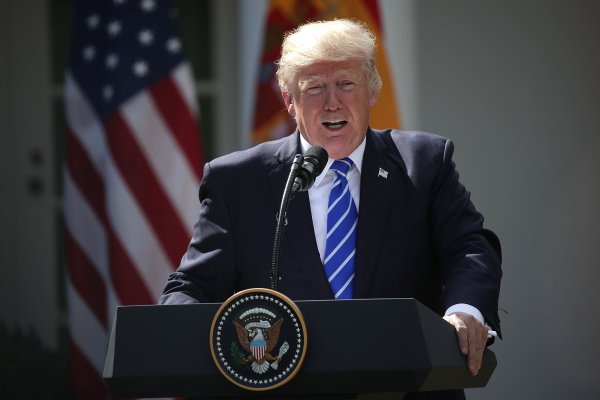