George Washington and the Real History Behind a Yom Kippur Legend

A statue of Robert Morris, George Washington and Haym Salomon sits on East Wacker Drive in Chicago on Sept. 5, 2009.
Raymond Boyd—Getty Images
By Olivia B. Waxman

In many ways, Yom Kippur — the Jewish day of atonement that begins Friday evening — is a time to start anew. So it was an apt backdrop for one of the most sensational legends about an important turning point in the birth of a nation.

As the story goes, during the American Revolution, in either 1779 or 1781 depending on whom you ask, General George Washington (or a messenger sent by him) burst into a Yom Kippur service at Philadelphia’s first synagogue to beg for money to feed a starving, bankrupt Continental Army. One of the synagogue’s founders, Haym Salomon, interrupted the holiest service of the year to write him a check for hundreds of thousands of dollars, throwing in the contents of the collection box on top of that. That’s how he became known as the “The Financier of the Revolution” in children’s books, textbooks and the 1939 film The Sons of Liberty, starring Claude Rains as Haym Salomon.

Experts say that, while exact sequence of events almost certainly didn’t happen, there are some kernels of truth in there.

The little that’s known about Salomon’s early life leaves much to the imagination. Born in Poland around 1740, to Jewish parents who had fled religious persecution in Portugal, he may have immigrated to colonial America in the early 1770s, around the time of the first partition of Poland. He may have gotten involved with the war effort first as a merchant selling provisions to soldiers on the Canadian frontier, but when he moved to the British-occupied New York, he got kidnapped by Hessians, German mercenaries working for the British forces during the American Revolution. “During this time, he remained loyal to the Patriots and reportedly spied for the Americans and helped prisoners to escape,” according to historian Beth Wenger‘s History Lessons: The Creation of American Jewish Heritage.

Wenger writes that, despite “very little documentation on Salomon’s early life,” he did help finance the Revolution.

The colonies had trouble raising money in the era before income tax, which is why they took out big loans from the French and the Dutch, a decision that would prove consequential as the young nation later came to terms with the need to repay those loans. Another source of funding for the Revolution came from Robert Morris, founder of the Bank of North America, who used his personal credit to fund troops through the Battle of Yorktown. Morris “relied on public-spirited financiers like Salomon to subscribe to the bank, find purchasers for government bills of exchange, and lend their own money to the government,” according to the National Park Service.

Overall, by the count of a think tank in his name, Salomon is thought to have contributed $650,000 (more than $9.4 billion in 2017 dollars) to the Revolutionary War effort. It wasn’t easy for him to do. He died “penniless” in 1785, presumably because his loans to the cause had not been repaid yet.

His sacrifice would be recognized more than a century and a half later during another period when the nation was in crisis, as the Chicago Patriotic Foundation campaigned for the monument that can still be seen in the Windy City today, which features Salomon front and center, flanked by Washington and Morris. The dedication ceremony ended up taking place about a week after Pearl Harbor, on Dec. 15, 1941. The monument is “a statement about American democracy in the face of intolerance at home and abroad in the 1930s and 1940s,” Wenger writes. “The monument’s supporters, which included President Franklin Delano Roosevelt, and many other leading politicians, considered the project an ideal public tribute at a time when racial and ethnic tensions were running high in the United States and when Europe was gripped by Nazism and World War.”

Because of his sacrifice, “Haym Salomon emerged as the first and perhaps most enduring heroic figure of American Jewery,” according to Wenger. “Accurately portrayed as a devout and practicing Jew, Salomon emerged as a model to inspire Jewish self-respect and loyalty, even as his patriotic contributions provided ‘proof’ that Jews belonged in America, and were devoted to it, from the start.” 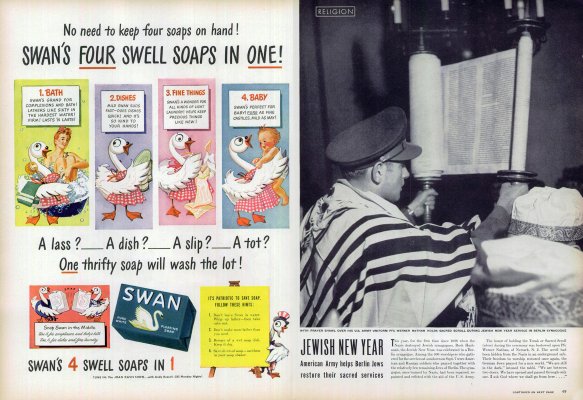 See Inside a Berlin Synagogue's First Rosh Hashanah After World War II
Next Up: Editor's Pick