As the results came in on Tuesday night, it was increasingly clear that the former Chief Justice of the Alabama Supreme Court Roy Moore was going to be the Republican nominee for Attorney General Jeff Sessions’ old Senate seat.

The defeat of incumbent Sen. Luther Strange in Tuesday’s run-off election was a win for the anti-establishment right wing of the Republican Party, whose heavy hitters stumped for Moore in the campaign. At a rowdy Monday night rally, former White House Chief Strategist Steve Bannon told a crowd in Fairhope, Ala. that the Tuesday night runoff would give Alabamians an opportunity to stick it to Washington elites.

“They think you’re nothing but rubes,” Bannon said of establishment Republicans. “And tomorrow, you’re going to get an opportunity to tell them what you think of the elites who run this country.”

And so they did. At around 8 p.m. with 13% of precincts reporting, Moore led Strange by 17 points. By 8:30 p.m. central time, the Associated Press declared Moore the winner, dealing a blow to President Trump and Senate Majority Leader Mitch McConnell, both of whom supported the incumbent candidate in the race.

There were reports that President Donald Trump, who traveled to Alabama last week to campaign for Strange, was bracing for a loss heading into election night. According to Politico, on Monday night Trump consulted with a group of conservative activists he’d met with about what kind of fallout he could face if Moore won — and had been complaining about having to stump for Strange throughout the campaign. Yet with his former staffers supporting the other candidate — who aligned more with Trump in terms of style than his opponent — Trump has made it clear that he would have no problem campaigning for Moore if it came to that.

“I told Luther, and I have to say this, if his opponent wins, I’m going to be here campaigning like hell for him,” Trump said during a Monday interview with the Rick & Bubba radio show.

Outside groups had weighed into the race — largely in efforts to boost Strange. The Senate Leadership Conference, the National Rifle Association, and the U.S. Chamber of Commerce had all spent ad dollars to blast Moore as the race drew to a close. Those ads clearly didn’t make a difference. And as political consultant and radio host Jack Campbell told TIME: “People down here don’t like people telling them how to vote.”

Sen. John Kennedy of Louisiana told TIME on Tuesday that he did not believe the election would be a referendum on McConnell, but rather a mirror of the 2016 presidential contest.

“The voters — the ordinary people of Alabama — are sick of Washington,” Kennedy said. “They feel let down. They’re trying to figure out if they just ought to throw up their hands and totally ignore Washington. They’ve been B.S.ed for a long time and they’re naturally cynical.”

To voters in Alabama, too, Strange had baggage. Both his connection to embattled former Alabama Gov. Rob Bentley, who appointed Strange as the former attorney general’s office was investigating him, and his links to McConnell, who has been pilloried by Moore’s supporters, were seen as negatives.

If Moore wins the special election on Dec. 12 — which is very likely in this deep red state — it could mean trouble for McConnell when the fiery conservative is sworn in. Democrats in Alabama, however, are hopeful that with such a controversial character at the top of the Republican ticket, their could have a fighting chance. “I really think either way, Democrats are in a good position,” Nancy Worley, Chairwoman of the Democratic Party in Alabama, said in an interview with TIME.

Looking forward, Moore’s win signals trouble for the Republican establishment that was already concerned about the prospect of vulnerable incumbents facing primary challenges from Moore-like characters.

But if Bannon has his way, Moore’s win is only the beginning.

-with reporting by Philip Elliott 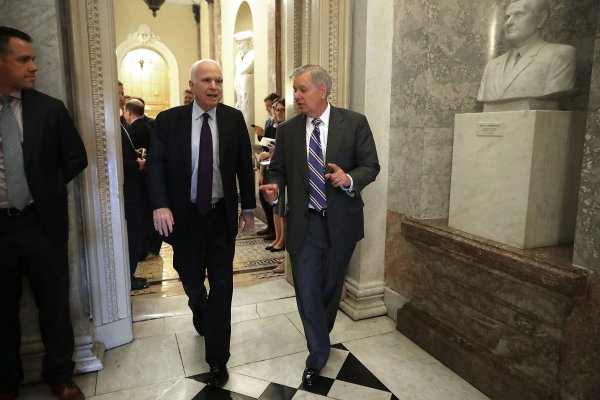 Lindsey Graham and John McCain Are Still Best Friends Even After His Health Care Decision
Next Up: Editor's Pick