The Dallas Cowboys Got Booed for Protesting the Anthem. This Was President Trump's Response

President Donald Trump continued to knock the NFL on Twitter early Tuesday morning after players, owners and general managers of the league’s teams took a knee and linked arms before and during the National Anthem during Monday Night Football.

Trump specifically refered to an incident during Monday night’s game between the Dallas Cowboys and Arizona Cardinals, where all of the Cowboys, including owner Jerry Jones and coach Jason Garrett, took a knee before the National Anthem. They then stood up and continued to link arms once it played.

“The booing at the NFL football game last night, when the entire Dallas team dropped to its knees, was the loudest I have ever heard,” Trump tweeted. “Great anger.”

“But while Dallas dropped to its knees as a team, they all stood up for the National Anthem,” he continued. “Big progress being made-we all love our country!”

Coverage of the moment where the entire Cowboys team took a knee shows a mixed reaction from the crowd, with boos heard from game attendees in the background. No members of the Cowboys franchise had participated in a demonstration until Monday night, which aimed to show solidarity within the team and the NFL amid Trump’s criticism of the kneeling movement.

More than 200 players either took a knee or sat during the National Anthem ahead of NFL games over the weekend — a demonstration first done by former San Francisco 49ers quarterback Colin Kaepernick last year. Over the weekend, Trump made a particularly brash comment about Kaepernick’s protests and those in the league that followed his lead, which spurred the massive response from the league.

“Wouldn’t you love to see one of these NFL owners, when somebody disrespects our flag, to say, ‘Get that son of a bitch off the field right now. Out. He’s fired. He’s fired!'” Trump told a crowd during a Friday rally in Arizona.

This was the first demonstration done by the Cowboys. The team’s owner, who joined players in kneeling before the National Anthem and locked arms with them during it, once said he “strongly” felt that everyone should recognize the flag “in a positive way” before a game, according to Sports Illustrated. When Kaepernick began his protests last year, Jones made clear that all of his players would stand for the National Anthem.

On Tuesday, Trump once again took aim at the NFL’s ratings, claiming they “are way down except before the game starts, when people tune in to see whether or not our country will be disrespected,” he tweeted.

It is unclear if ratings for NFL games were indeed down over the weekend and on Monday night. Sports Illustrated said ratings for the weekend were likely down compared to the same week last year, but may move up due to Monday’s Cowboys vs. Cardinals game. 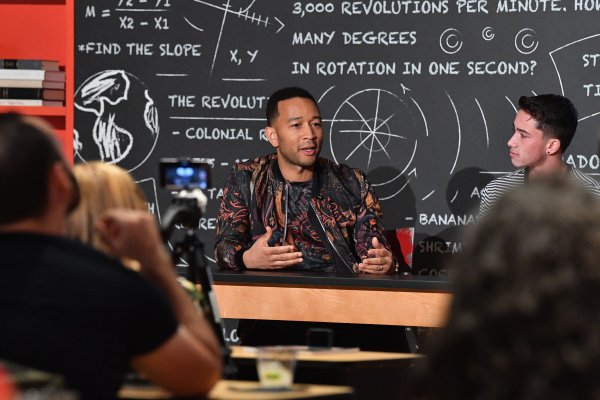