The Senate Finance Committee was holding a hearing to address questions about the legislation, known as Graham-Cassidy for its architects, Republican Sens. Bill Cassidy of Louisiana and Lindsey Graham of South Carolina. Just as the Senators settled in, chants of “No cuts to Medicaid, save our liberty!” echoed throughout the hearing room.

Utah Republican Sen. Orrin Hatch, who chairs the committee, called for a brief recess until things calmed down. Still, protesters, some in wheelchairs, were carried and dragged out of the hearing room by U.S. Capitol police. Many of the protesters were affiliated with ADAPT, a grassroots’ disability rights’ activist group. The group shared images on social of its activists, as well as those from other groups, being arrested and carried away by officers.

The Senate is gearing up to vote on a last-ditch effort to repeal the Affordable Care Act before the window to do so under special Senate rules requiring only a simple majority expire at the end of the month. A handful of Republicans have expressed opposition to the Graham-Cassidy proposal, putting its future in jeopardy since Republicans can only afford to lose two of their members on the bill.

Read more: Obamacare Repeal Is on Life Support. These 5 Senators Could Decide Its Fate

While supporters of the bill have touted how it would shift health care policy away from the federal government and toward the states, opponents — which include a wide spectrum of medical groups and insurers — say it would result in steep drops in coverage and be costly for people with pre-existing conditions. 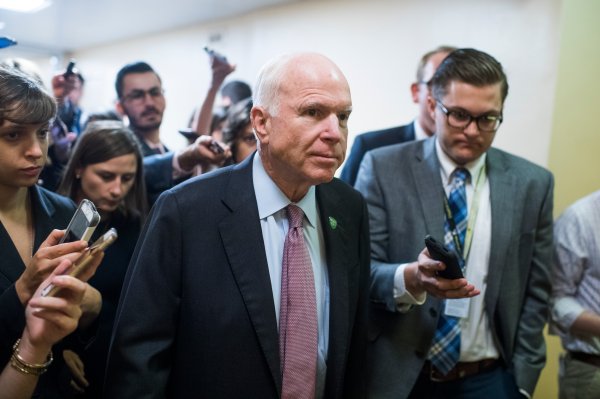