Ahmad Wani isn’t your typical Silicon Valley entrepreneur. Instead of inventing his company in a college dorm room or a Palo Alto garage, he conceived of his big idea while trapped in monsoon floods that rocked Pakistan and northern India.

As Wani and his family spent a week waiting to be rescued in 2014, the then-Stanford University engineering student began to wonder whether first responders have enough information to decide where to focus their resources after a devastating event. Returning to the U.S. to another natural disaster — this time an earthquake in Napa Valley just north of San Fransisco — reinforced the question. “I realized that there’s no science behind response,” he says. “There are thousands of 911 calls and response is not necessarily directed to places that need it.”

Out of that realization came a plan to reshape disaster management using big data. Just a few months later, Wani worked with two fellow Stanford students to create a platform to predict the toll of natural disasters. The concept is simple but also revolutionary. The One Concern software pulls geological and structural data from a variety of public and private sources and uses machine learning to predict the impact of an earthquake down to individual city blocks and buildings. Real-time information input during an earthquake improves how the system responds. And earthquakes represent just the start for the company, which plans to launch a similar program for floods and eventually other natural disasters.

Now, two years later, the company employs two dozen people, including top emergency management professionals, and counts the earthquake-prone cities of San Fransisco and Los Angeles as clients. “Their ability to predict damage at a really microlevel is really game changing,” says Michael Dayton, deputy director of the San Francisco Department of Emergency Management. “It was night and day from other technology.”

Previous software might identify a general area where responders could expect damage, but it would appear as a “big red blob” that wasn’t helpful when deciding exactly where to send resources, Dayton says. The technology also integrates information from many sources and makes it easy to parse in an emergency situation when every moment matters. The instant damage evaluations mean fast and actionable information, so first responders can prioritize search and rescue in areas most likely to be worst-hit, rather than responding to 911 calls in the order they are received.

One Concern is not the only company that sees an opportunity to use data to rethink disaster response. The mapping company Esri has built rapid-response software that shows expected damage from disasters like earthquakes, wildfires and hurricanes. And the U.S. government has invested in programs to use data to shape disaster response at agencies like the National Oceanic and Atmospheric Administration (NOAA).

A demonstration of the One Concern technology during a recent visit to the company’s Palo Alto office shows how users can map out the most at-risk parts of the city. The screen can display the effects of specific events — such as a magnitude 6.0 earthquake originating offshore — or look at the average of a large sample of potential events.

Different users will find different features most relevant. A team tasked with preparing the city for an earthquake can look at which schools are in the worst shape. The urban search and rescue team can predict which buildings are most likely to collapse completely depending on where the earthquake originates. Planners might look at which bridges are in greatest need of a retrofit.

The technology comes as earthquakes continue to rattle highly populated urban centers across the globe. A series of earthquakes in Mexico this year have killed hundreds, and those events pale in comparison to the deadliest events, like the 2010 earthquake in Haiti that killed tens of thousands of people.

The cities that have adopted One Concern have not experienced such devastating disasters since launching the technology, but the software has already reshaped how they prepare. San Fransisco has adjusted the location of relief staging areas and potential shelters to avoid hazards, while making it easier to access the most vulnerable, says Dayton.

“Our mission is to save lives,” Wani says. “How do we make the best decisions to save the most lives?” 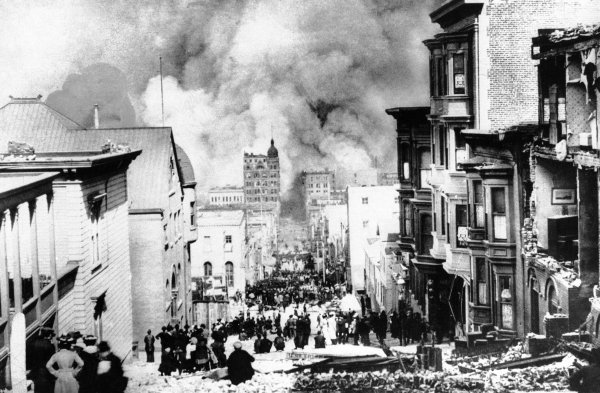 Is the U.S. Overdue for a Catastrophic Earthquake? These Cities Are Most at Risk
Next Up: Editor's Pick