John Oliver wants you to know that small business is the backbone of our economy — and he has the eerily echoing footage of U.S. politicians to prove it. “It’s that rare thing that ever politician agrees on,” said Oliver. “It’s that, support our troops, Ted Cruz can go f— himself, and South Dakota Senator John Thune can get it.”

While small business is the backbone of the economy, these days, big business is getting bigger than ever thanks to mergers and acquisitions, which is what Oliver focused on during Sunday night’s episode of Last Week Tonight. Corporate consolidation means that independent-seeming companies like Tom’s of Maine and Burt’s Bees are owned by large corporations, 90% of the car rental business is dominated by three companies, 70% of the U.S. beer industry is owned by two companies, and online search is dominated by one company: “That’s right, Bing — the best way to Google something,” joked Oliver.

Oliver even noted that his own parent company TimeWarner is attempting to merge with AT&T, which makes this story “a bit dangerous” for them to report. Luckily, Oliver seems convinced AT&T executives wouldn’t be able to get their service to work, because “AT&T: it’s the top telecom company around, alphabetically and nothing else.”

Oliver isn’t opposed to all mergers or acquisitions, but since the late 1970s the U.S. economy has become overwhelmingly “merger friendly,” even according to business-friendly people like the host of CNBC’s Mad Money, Jim Cramer, a.k.a. a “business casual Louis CK,” says Oliver.

To illustrate one way that corporate consolidation can be bad for consumers, Oliver looked to the airline industry. When American Airlines became the first airline to charge for checked luggage, every other airline followed, now racking up $4.2 billion a year for the airline industry, and customers have little recourse.

According to Oliver, corporate consolidation can also crush smaller companies in the supply chain, illustrating his point with a story about Lenscrafters’ parent company Luxottica cutting ties with Oakley sunglasses over pricing, and causing their stock price to collapse. The saga caused Oliver to feel sorry for Oakley, “the official sunglasses of guys who unironically use the term ‘fingerblasting’.”

Oliver ends his segment by pleading with the Federal Trade Commission and the Department of Justice to use their anti-trust powers, after all, small business is the back bone of the economy. 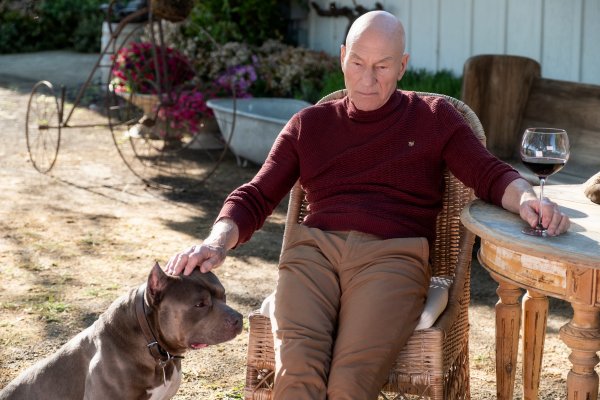 How Picard Fits Into the Star Trek Timeline
Next Up: Editor's Pick