For NFL Teams, Unity Is the Message

The day began with yet another attempt by President Donald Trump to curb free speech and control the actions of private citizens.

Trump, as he is wont to do, opened his Twitter account in the early morning hours to issue another rebuke of NFL players who choose to demonstrate during the national anthem. “Fire or suspend!” he wrote, and in the same message also called for fans to boycott America’s most popular pro sports league.

Less than three hours later, NFL Sunday kicked off in London, where the Ravens and the Jaguars made the first in what would be a long day of shows of unity in response to Trump’s comments. Jaguars owner Shad Khan, one of seven owners who donated $1 million to the president’s inaugural committee, stood on the sideline during the anthem, his arms linked with tight end Marcedes Lewis and linebacker Telvin Smith. On both sidelines, players joined arms as “The Star-Spangled Banner” played, and several players kneeled for the first time this season.

As the day continued, NFL teams in all parts of the country would follow suit in responding to the president’s remarks with quiet actions during the anthem. Most players linked arms; some kneeled; and Steelers coach Mike Tomlin kept his players off the field entirely during the anthem, with the exception of left tackle Alejandro Villanueva, an Army veteran, who stood by himself near the tunnel at Soldier Field with his hand on his heart. It was the most widespread NFL participation in the movement former 49ers quarterback Colin Kaepernick started last season, when he began taking a knee during the pregame playing of the national anthem to protest police brutality and social injustices in the U.S.

The leaguewide call to action was spurred Friday night, when at a rally in Alabama, Trump disparaged players who demonstrate during the national anthem and called for them to be fired. “Wouldn’t you love to see one of these NFL owners, when somebody disrespects our flag, to say, ‘Get that son of a bitch off the field right now, out, he’s fired. He’s fired!’ ” Trump then noted that many of the NFL team owners are friends of his.

Trump continued, noting that NFL ratings are down “massively,” and taking credit for that. In further disrespect for the players, he then criticized the league’s rules promoting player safety, saying that the penalties for players who make illegal hits are “ruining the game.” His words reverberated around the league, sending such large shockwaves that even owners who have backed him financially and whom he’d count among his friends issued statements rebuking his remarks. That list includes Patriots owner Robert Kraft, who is among the owners closest to Trump and who also issued one of the most strongly worded statements, saying that he was “deeply disappointed by the tone of the comments made by the President.” (Most NFL team owners or representatives have issued some statement in response to Trump’s comments; exceptions, as of mid-afternoon, included Dallas’s Jerry Jones, Washington’s Daniel Snyder and Carolina’s Jerry Richardson.

Trump doubled and tripled down on Twitter on Saturday and Sunday, only taking a break in his assault against the NFL and NBA to threaten North Korea leader Kim Jong-un. Around the league, teams responded. Some of the reactions Sunday:

• In Philadelphia, Eagles owner Jeffrey Lurie stood at midfield among a cluster of players who raised their fists during the anthem, including safety Malcolm Jenkins and receiver Torrey Smith, as the anthem played with a large flag unfurled across the field. On the opposite sideline, Giants players and coaches linked arms. For the first time, Damon Harrison, Landon Collins and Olivier Vernon took a knee.

• In Foxborough, Mass., a group of about 16 Patriots kneeled together, locking arms. They were booed by the home crowd.

• In Charlotte, 10 Saints players sat on the bench during the national anthem: safety Rafael Bush, safety Kenny Vaccaro, safety Chris Banjo, defensive end Alex Okafor, defensive tackle Sheldon Rankins, defensive end Cameron Jordan, running back Adrian Peterson, running back Alvin Kamara, running back Mark Ingram and receiver Brandon Coleman. Four teammates stood behind them with hands on their shoulders. On the Panthers sideline, veteran defensive end Julius Peppers was nowhere to be found during the anthem. Throughout the preseason and into the regular season, Peppers had been standing for the anthem.

• In East Rutherford, N.J., the team owned by Trump’s current ambassador to the U.K, Woody Johnson, all stood along the sidelines, with their arms linked. Johnson’s brother, Christopher, who is the acting owner while Woody serves in Trump’s administration, joined the players. On the opposite sideline, the Miami Dolphins players also stood in a line, with their arms linked. At the far end of the line, four Dolphins kneeled—left tackle Laremy Tunsil, safety Maurice Smith and receivers Julius Thomas and Kenny Stills. Wideout Jarvis Landry stood between them, with his arm on the shoulders of Smith and Thomas. After the anthem concluded, all five men hugged.

• Before their game in Nashville, the Seahawks as a team announced that they would stay in the locker room.

It was a powerful message sent by the NFL, the country’s most popular sports league, standing up together quietly and peacefully after being disrespected by the president. But as Trump no doubt knows, there were also plenty of fans in stadiums or watching at home on TV—and others who heeded his call to boycott the NFL—who believe he’s on the right side of this issue and won’t hear otherwise. In a way, the leaguewide demonstrations played into the hands of a president willing to sacrifice First Amendment rights for the sake of riling up his base.

But that’s not how Sunday will be remembered. It will be remembered as an unprecedented display of unity in the NFL, between white players and black, between conference rivals, in all corners of the country, in defense of their rights as American citizens. And on the opposite side, is the leader of the free world. 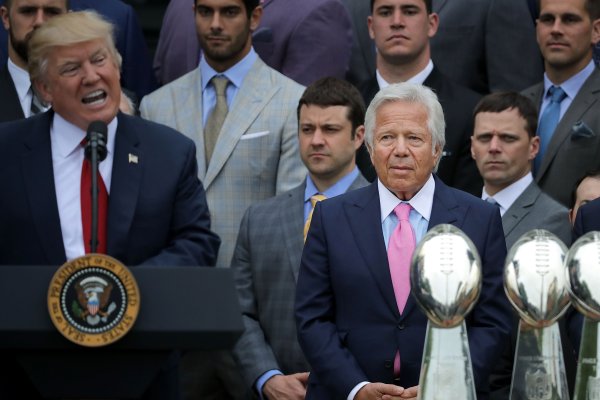 NFL Owners Should Stand Up to Donald Trump on National Anthem Protests
Next Up: Editor's Pick