President Trump Tweets NFL Players 'Standing With Locked Arms Is Good.' They Were Protesting Him

President Donald Trump sent mixed messages about the kneeling movement sweeping the sports world — appearing to support some of the unprecedented solidarity among NFL players Sunday after he encouraged football fans to boycott games if players took part in the silent protest during the national anthem.

Following early-morning tweets where he criticized the NFL’s ratings, Trump returned to Twitter Sunday afternoon after more than 100 football players linked arms or knelt during the anthem — a visually defiant moment in response to criticism from the President about similar protests started last year by former San Francisco 49ers quarterback Colin Kaepernick.

“Great solidarity for our National Anthem and for our Country. Standing with locked arms is good, kneeling is not acceptable. Bad ratings!” Trump tweeted.

The Pittsburgh Steelers stayed in the locker room as the national anthem played Sunday before they played the Chicago Bears.”We’re not going to let divisive times or divisive individuals affect our agenda,” Steelers coach, Mike Tomlin, said before the game, according to the AP. The team’s decision was, according to Tomlin, “not to be disrespectful to the anthem but to remove ourselves from this circumstance. People shouldn’t have to choose.”

On Friday, Trump denounced Kaepernick-style protests at a rally for Alabama Sen. Luther Strange. “Wouldn’t you love to see one of these NFL owners, when somebody disrespects our flag, to say, “Get that son of a bitch off the field right now. Out. He’s fired. He’s fired!” Trump said at the rally.

Trump on Saturday rescinded his White House invite to the Golden State Warriors’ star player, Stephen Curry, an outspoken critic of the Trump administration. In response, the Golden State Warriors, who won the NBA championship title earlier this year, released a statement saying the entire team would skip the White House visit — a longstanding tradition where winning sports teams get to meet the President.

“While we intended to meet as a team at the first opportunity we had this morning to collaboratively discuss a potential visit to the White House, we accept that President Trump has made it clear that we are not invited. We believe there is nothing more American than our citizens having the right to express themselves freely on matters important to them,” the team said in a statement.

The team is still planning on going to Washington in February. “In lieu of a visit to the White House, we have decided that we’ll constructively use our trip to the nation’s capital in February to celebrate equality, diversity and inclusion — the values that we embrace as an organization,” the team’s statement said. 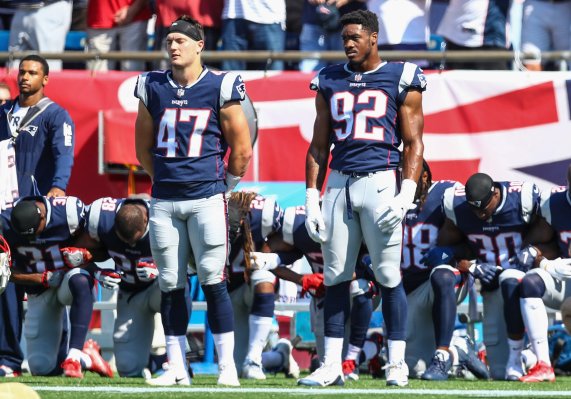