Almost a year after Colin Kaepernick first knelt as the U.S. national anthem played ahead of a game, his silent protest has once again become the subject of national attention — this time, because President Trump has launched a days-long tirade at players who have joined the movement.

But while a year ago, it was the act of kneeling in protest police treatment of African Americans that captured the most attention, in 2017, it appears to be Trump’s unconventional response to the act. Since Friday, the Commander in Chief has called for NFL fans to walk out of games if they saw a player kneel, and added on Twitter that the NFL should fire or suspend players who take a knee.

Trump’s criticism of the kneeling movement comes in stark contrast to how then-President Barack Obama reacted to Kaepernick’s actions. Last September, during a CNN town hall, Obama was careful not to take sides and instead focused on the First Amendment right of free speech. See the difference between their reactions below:

“We’re proud of our country, we respect our flag,” Trump said at a rally Friday. “Wouldn’t you love to see one of these NFL owners, when somebody disrespects our flag, to say, ‘Get that son of a bitch off the field right now, out, he’s fired. He’s fired!”

“Some owners are going to do that. [They will say] ‘that guy who disrespects our flag, he’s fired!’ That owner, they don’t know it. They’re friends of mine, many of them. They don’t know, they’ll be the most popular person for a week,” he continued at the stump speech in Alabama.

“I know we have freedoms, and freedom of choice… but you know what, it’s still disrespectful,” he said. “The only thing you can do better is if you see it, even if its one player, leave the stadium. I guarantee it, things will stuff. Just pick up and leave.”

He continued railing on the NFL protests Sunday, taking to Twitter to slam the league’s ratings and encourage fans to boycott games.

“There are gonna be a lot of folks who do stuff we don’t agree with…but as long as they’re doing it within the law, then we can voice our opinion objecting to it, but it’s also their right,” Obama said during a CNN town hall event last September, not long after Kaepernick first knelt.

Obama did not call for the NFL to fire or suspend any of its players for the incident. Instead, he encouraged onlookers to think about why Kaepernick was taking action.

“I want Mr. Kaepernick and others who are on a knee, I want them to to listen to the pain that that may cause somebody who, for example, had a spouse or a child who was killed in combat and why it hurts them to see somebody not standing. But I also want people to think about the pain he may be expressing about somebody who’s lost a loved one that they think was unfairly shot,” Obama said. 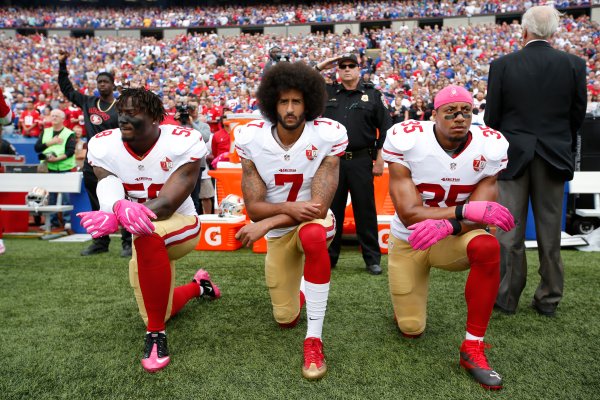 ‘They Can Do Free Speech on Their Own Time.” Trump’s Team Plays Defense Amid NFL Spat
Next Up: Editor's Pick