“While we intended to meet as a team at the first opportunity we had this morning to collaboratively discuss a potential visit to the White House, we accept that President Trump has made it clear that we are not invited. We believe there is nothing more American than our citizens having the right to express themselves freely on matters important to them,” a statement from the Warriors reads.

Earlier Saturday, Trump tweeted, “Going to the White House is considered a great honor for a championship team. Stephen Curry is hesitating, therefore invitation is withdrawn!”

Curry had said on multiple occasions that he was not likely to make the visit after his team won the NBA championship title, later adding that he felt no members of the team should go.

The Warriors added that they were disappointed they wouldn’t have the opportunity to create a dialogue on important issues, but said they would still use the time in a meaningful way.

“In lieu of a visit to the White House, we have decided that we’ll constructively use our trip to the nation’s capital in February to celebrate equality, diversity and inclusion — the values that we embrace as an organization.” 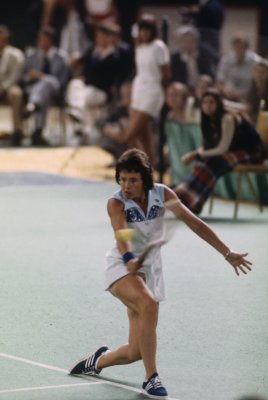 How Billie Jean King Won the Battle of the Sexes, as Told in 1973
Next Up: Editor's Pick