Athletes Beat Donald Trump In the Sport of Trash Talk

This week at the United Nations General Assembly, President Donald Trump referred to North Korean leader Kim Jong-un as “Rocket Man.” Last night he called NFL players who kneel in protest during the national anthem “sons of bitches.” This morning he tweeted at Stephen Curry, an athlete pretty much everyone admires, calling him in effect “hesitant” and disinviting him from a ceremonial White House visit for the NBA champs, which some have said is the equivalent of telling the prom date who clearly doesn’t want to go to the dance with you that you’re not interested.

That is to say, the President of the United States has become engaged in good old-fashioned “trash-talk.” And if he’s going to get into it, he might as well study this craft closely. Conveniently, he can learn from the sports world with which he has suddenly become so preoccupied. Sports has a long, storied history of chirping — Curry himself threw a zinger at Trump earlier this year. Athletes have shown that trash talk can be funny and effective, if done well.

On Friday night, during a campaign rally for Alabama senator Luther Strange, Trump referred to players who’ve followed Colin Kaepernick’s lead in protesting the national anthem before NFL games because of police brutality and racial injustice “sons of bitches.” He called for NFL owners to fire these players and for fans to boycott the NFL. He also said the league is “ruining” the game because of safety rules. (On Saturday afternoon, Trump again weighed in on the anthem issue in a series of two tweets. “If a player wants the privilege of making millions of dollars in the NFL,or other leagues, he or she should not be allowed to disrespect, ..our Great American Flag (or Country) and should stand for the National Anthem. If not, YOU’RE FIRED. Find something else to do!”)

Just as players and fans were digesting the President’s latest broadside, they awoke to an 7:45 a.m. tweet from the Trump on Saturday morning. “Going to the White House is considered a great honor for a championship team,” he wrote. “Stephen Curry is hesitating,therefore invitation is withdrawn!” Curry, however, wasn’t doing much hesitating: he had stated an intention to not attend a White House ceremony. “By acting, and not going, hopefully that will inspire some change when it comes to what we tolerate in this country, what is accepted and what we turn a blind eye toward,” Curry told reporters during Warriors media day on Friday. Back in February, after Under Armour CEO Kevin Plank called Trump an “asset” to the county, Curry told a reporter, “I agree with that description. If you remove the ‘et’ from asset.”

There are several techniques for effective vocal instigation. Muhammad Ali rhymed his: “Float like a butterfly and string like a bee … his hands can’t hit what his eyes can’t see.” Moses Malone was more economic. When the Hall of Fame center was asked his prediction for the 1983 playoffs, Malone responded: “Fo’, fo’, fo’.” The Sixers, according to Moses, would sweep three straight playoffs series in four games. He was off by just one game: Philly went 12-1 on its way to the title.

Richard Sherman displayed the power of surprise. When approached for a typically innocuous sideline interview following Seattle’s win over San Francisco in the 2014 NFC Championship game, Sherman started screaming about how he was “the best corner in the game,” called 49ers Michael Crabtree a “sorry receiver” and punctuated the rant by yelling “LOB,” a nod to Seattle’s fierce “Legion of Boom” defense. Two weeks later, Seattle annihilated Peyton Manning’s Denver Broncos in the Super Bowl, 43-8.

(Sherman’s Twitter response to Trump’s attacks on the NFL and NBA: “The behavior of the President is unacceptable and needs to be addressed. If you do not Condemn this divisive Rhetoric you are Condoning it!!”)

Then there are the simply cunning and cutting. In a televised interview, NBA star Kevin Garnett once gave beloved TNT reporter Craig Sager, known for his blinding sartorial choices, a little advice. “Tonight, I am stressing to you, you take this outfit home, and you burn it.” Larry Bird feigned disappointment after fulfilling his prediction to Seattle’s Xavier McDaniel that he’d stick a winning shot. “Damn,” he told McDaniel. “I didn’t mean to leave two seconds on the clock.” Near the end of Game 1 of the 1997 NBA Finals, played on a Sunday, Chicago’s Scottie Pippen whispered in the ear of Utah’s Karl “The Mailman” Malone, who was about to take key foul shots, “The Mailman doesn’t deliver on Sundays.” Malone missed them both. The Bulls won.

Trump could even turn to one of his favorite NFL teams, the New England Patriots, for trolling tips. (He’s repeatedly boasted about his friendships with Pats owner Robert Kraft, coach Bill Belichick and quarterback Tom Brady). After former New York Jets coach Rex Ryan was discovered to have a bit of a foot fetish, then-Pats wide receiver Wes Welker made 11 references to feet in a press conference before a Pats-Jets playoff game. (“We’re going out there being good little foot soldiers”; “It’s a playoff atmosphere and you can’t just stick your toe in the water”) Even Belichick, known for his dour public persona, can throw good shade. He spoke for many this week when he reacted to the release of Tom Brady’s new book on the healthy “TB12” lifestyle and diet. “We see Tom every day,” he said. “I don’t really feel like we need to read a book.”

Even moms of athletes have a talent for trash talk. Theresa Kaepernick, Colin’s mother, posted a succinct response to the President calling NFL anthem protestors “sons of bitches”: “Guess that makes me a proud bitch!”

The lessons here? For one, pick targets wisely. Curry, for example, is universally respected for blossoming from an unheralded, undersized college player into one of the flashiest shooters the sport has ever seen. Even his basketball frenemy, LeBron James, rushed to Curry’s defense. He called Trump a “bum” on Twitter — which, in its effortlessness, felt more successful than the President’s characterization — and pointed out the obvious: Curry had no plans to head to Washington anyhow.

“Going to the White House was an honor until you showed up!” James wrote, proving another age-old tenet of trash-talk: don’t give an opponent an opportunity to get in another word.

But perhaps the most important thing to know about this realm is this: Trash-talk never wins you the game. The great players get the job done. Everyone else might as well be shouting from the sidelines. 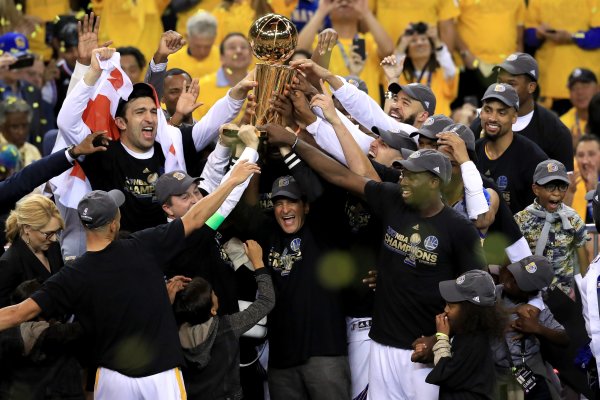 Warriors: President Trump Has Made It Clear That We Are Not Invited
Next Up: Editor's Pick