Amid a series of tweets ranging from the NFL to healthcare, President Donald Trump also made an announcement: Stephen Curry’s White House invitation was withdrawn.

“Going to the White House is considered a great honor for a championship team. Stephen Curry is hesitating, therefore invitation is withdrawn!” Trump tweeted Saturday morning.

The point guard for the Golden State Warriors has said on multiple occasions that he was not likely to attend the visit to the White House as a member of the team, which won the NBA championship title in June. Initially, Curry said he “probably” would not go.

“I don’t want to go. That’s the nucleus of my belief. If it was just me, it would be a pretty short conversation,” Curry told reporters Friday.

The NAACP also took to Twitter to defend Curry, posting “A hero dissed by a …. fill in the blank #TakeAKnee.”

The Warriors later released a statement on Twitter, saying, “We accept that President Trump has made it clear that we are not invited.

The Hill noted that this week, Curry said he didn’t think the rest of the team should go either.

“We basically don’t stand for what our President has said, and the things he hasn’t said at the right time,” Curry said, according to SF Gate.

He said he hopes that by not going, it will “inspire some change for what we tolerate in this country and what we stand for.”

“We’re all trying to do what we can, using our platforms, our opportunities, to shed light on it,” Curry said. “I don’t think not going to the White House will miraculously make everything better. But this is my opportunity to voice that.” 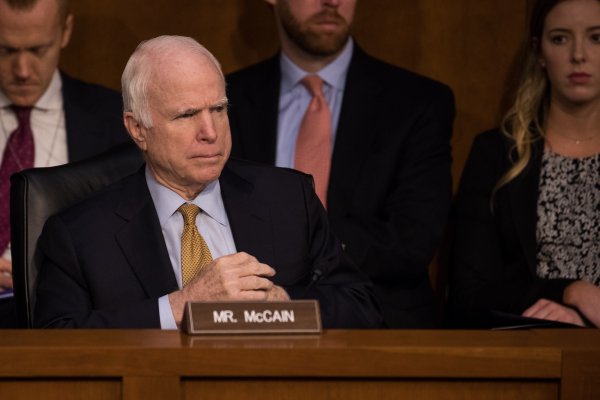 Trump: McCain ‘Let Arizona Down’ on Health Bill
Next Up: Editor's Pick