With his threat at the United Nations this past week to “totally destroy” North Korea if necessary, and his labeling of North Korean leader Kim Jong-un as a “Rocket Man” on a “suicide mission,” President Donald Trump escalated his war of words with a country flirting with a nuclear strike. Few world leaders at the General Assembly cheered him.

On Friday, Trump got his applause — by hurling his “tough” talk at America’s de facto national pastime, NFL football. At a rally in Huntsville, Ala., in support of Republican Senator Luther Strange, Trump cursed some of its players, and mocked the game itself:

“Wouldn’t you love to see one of these NFL owners, when somebody disrespects our flag, to say, ‘Get that son of a bitch off the field right now, out, he’s fired. He’s fired!”

The President of the United States tore into NFL players exercising their free speech rights with more conviction than he condemned white supremacists — one of whom allegedly drove a car into protesters, killing one of them — in Charlottesville.

“It’s a shame and disgrace when you have the President of the US calling citizens of the country sons of a bitches,” Minnesota Vikings running back Bishop Sankey tweeted.

“Trump stay in ur place,” wrote Washington Redskins linebacker Zach Brown on Twitter, “football have nothing to do wit u smh.”

Others felt Trump’s words justified the protests and social activism with which more pro athletes have become engaged.

“I’m actually glad Trump said what he did,” tweeted former Green Bay Packers running back Ryan Grant. “Publicly with an audience. Once again it empowers the players to live their truth.”

NFL Players Association executive director DeMaurice Smith said in a statement: “Whether or not Roger and the owners will speak for themselves about their views on player rights and their commitment to player safety remains to be seen. This union, however, will never back down when it comes to protecting the constitutional rights of our platers as citizens as well as their safety as men who compete in a game that exposes them to great risks.”

Also, in the wake of a study showing that 99% of NFL players studied by neuropathologists suffered from CTE, a degenerative brain disease associated with football head trauma, and this week’s finding that convicted murderer Aaron Hernandez, who committed suicide in prison in April, also had CTE, Trump mocked NFL safety initiatives. He attributed the NFL’s ratings declines to a softer game.

NFL owners have thrown their support behind Trump. Eight owners donated a total of $7.25 million toward his inauguration: Dallas Cowboys owner Jerry Jones, New England Patriots owner Robert Kraft, and New York Jets owner Woody Johnson — whom Trump named ambassador to the United Kingdom — each gave $1 million. In return, the President has mocked their product, called for an NFL boycott, and cursed the league’s players. Their continued silence, after Trump’s latest outburst, will sting. And speak volumes about their love of the bottom line.

NFL commissioner Roger Goodell released a statement Saturday morning. “Divisive comments like these demonstrate an unfortunate lack of respect for the NFL, our great game and all of our players, and a failure to understand the overwhelming force for good our clubs and players represent in our communities.”

Say what you want about NFL players. Their toughness, however, cannot be denied. They play a brutal game that causes great pain. Now’s our chance to see if NFL owners have a sliver of their mettle. 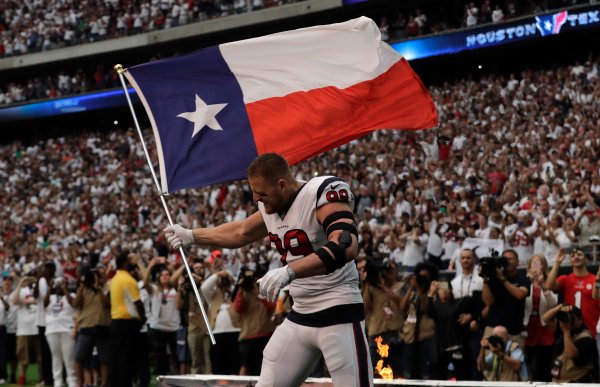 J.J. Watt Got a Hero's Welcome in His First Game After Raising Millions for Harvey Relief
Next Up: Editor's Pick