London’s transportation authority announced Friday that the ride-sharing company Uber will not be issued with a private hire operator license when its current license expires on Sept. 30.

A statement shared by Transport for London (TfL) on Twitter said the app “is not fit and proper to hold a private hire operator licence” and had demonstrated “a lack of corporate responsibility in relation to a number of issues which have potential public safety and security implications.”

Around 40,000 people work as drivers for Uber in London and around 3.5 million Londoners use the app. The statement said that Uber can appeal the decision within 21 days of it being communicated, and the company can continue to operate “until any appeal processes have been exhausted.”

The Mayor of London, Sadiq Khan, said he “fully” supported TfL’s decision. “It would be wrong if TfL continued to license Uber if there is any way that this could pose a threat to Londoners’ safety and security,” his statement said, adding: “Any operator of private hire services in London needs to play by the rules.”

“By wanting to ban our app from the capital, Transport for London and the Mayor have caved in to a small number of people who want to restrict consumer choice,” Tom Elvidge, the General Manager of Uber in London, told TIME in a statement. “If this decision stands, it will put more than 40,000 licensed drivers out of work and deprive Londoners of a convenient and affordable form of transport.”

Today’s TfL ruling comes as Uber is fighting a legal battle with labor unions over its drivers’ rights. In October last year, a employment tribunal ruled that the San Francisco-based company should lose the right to classify its U.K. drivers as self-employed and stated that the company must also pay its drivers national living wage and holiday pay.

A lawyer from the firm which represented the drivers described the landmark ruling as “a ground-breaking decision” that would have an impact on “all workers in the so-called gig economy whose employers wrongly classify them as self-employed and deny them the rights to which they are entitled.”

Uber argues its drivers are self-employed contractors and not employees, and immediately said it would appealed the decision. In April this year, the company was granted the right to appeal and a date has been set for a two-day hearing which will begin on Sept. 27. 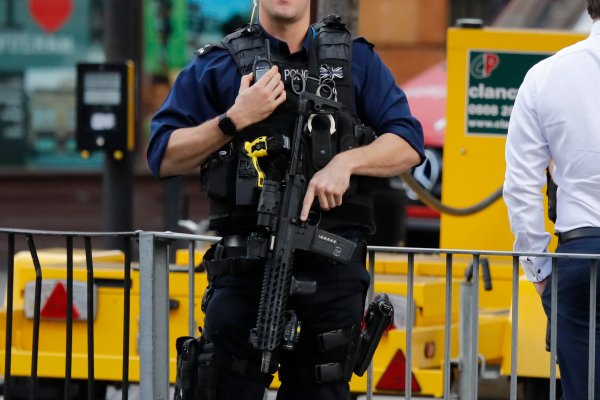 U.K. Officials Raise the Terror Level to Critical
Next Up: Editor's Pick