Sonia Sotomayor discusses the food traditions of the Supreme Court at the Smithsonian Museum of American History in Washington on June 1, 2016.
Cliff Owen—AP
By Tessa Berenson

As a Supreme Court justice, Sonia Sotomayor knows she shouldn’t speak out on political issues. But at an event in Washington, D.C. Thursday, she hinted at her views on one of the topics that most divides politicians in the other two branches of government: immigration.

“It’s a real issue,” Sotomayor said at an event at the Newseum hosted by iCivics, a nonprofit founded by former Justice Sandra Day O’Connor. “Why? Because some people feel at risk. If that is what is motivating them, whatever answer we find as a nation is going to have to deal with that. It’s going to have to address it in some meaningful way that will give people some sense of greater security than what they’re feeling.”

Pacing among the crowd and giving hugs to questioners, Sotomayor, a member of the liberal wing of the court, also waded into college affordability. “I think there are many more programs that the government should be supporting and participating in,” she said in response to a question from a Latina high school student about how government could be more inclusive. “The rising cost of college today is not just strangling people of color like us, but it strangles everybody. So government has to be looking at that.”

As Sotomayor promoted civic engagement and encouraged people to respect those with opposing political views, she took a gentle swipe at television news. “Television is soundbites,” she said, saying society has lost something when people get their news from cable rather than newspapers. “And soundbites have the danger of cutting off important discussions that require in-depth consideration of issues.”

But she acknowledged that in today’s heated climate, some people may not be open to productive dialogue. “If someone is a racist within their stomach, there may be nothing you can say that will change that,” she said. “There are some conversations that won’t change the problem, or for which you can’t find a solution. What you have to do is try to find commonality with enough people so that person’s voice won’t win out.” 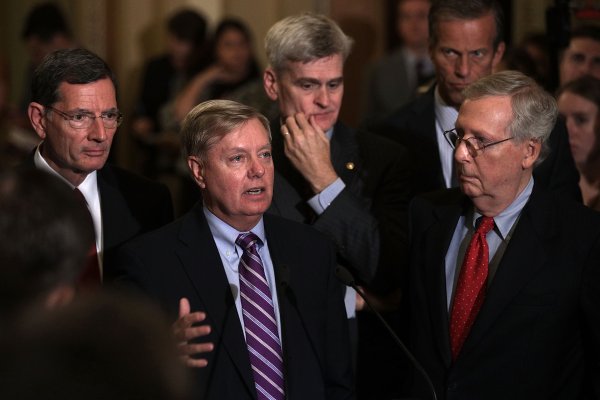 GOP Doesn't Know What Obamacare Repeal Bill Will Do
Next Up: Editor's Pick