How Picard Fits Into the Star Trek Timeline

It’s been 26 long years since Star Trek: The Next Generation graced the small screen. But beginning Jan. 23, a new series centered around that show’s captain, Jean-Luc Picard (Patrick Stewart), will “boldly go” to the network’s streaming service, CBS All Access. Star Trek: Picard is about our titular captain’s life many years after his last fateful mission for Starfleet.

But how does Picard fit into the larger Star Trek timeline? The CBS series is set where no Trek has gone before, well past the events of TV’s Star Trek: Voyager and the last film of the Picard era, Star Trek: Nemesis. Many fan favorite characters are expected to return, including Commander William T. Riker (Jonathan Frakes) and Seven-of-Nine (Jeri Ryan).

For Trek nerds out there, this means Picard takes place in the “prime” timeline, which is where each of the television series and the original films live. In 2009, J.J. Abrams rebooted the series with the film Star Trek, creating a new timeline for the already confusing Trek universe. In the film, a bad guy travels back in time and destroys the USS Kelvin, killing Captain Kirk’s father, George Kirk, in the process. All three of J.J. Abrams’ movies take place in this alternate timeline called the “Kelvin Timeline,” after the annihilated ship.

To familiarize yourself with the Trek universe, here are the two timelines:

Yeoh and Martin-Green kick off the new Star Trek with an action-packed episode on Sept. 24
Jan Thijs—CBS

Plot: Sonequa Martin-Green plays officer Michael Burnham, a human who was raised by Spock’s parents, Amanda and Sarek. Burnham has suppressed her human tendencies in order to assimilate into the hyper-logical Vulcan society but tries to reconnect with her emotional side when she serves Captain Philippa Georgiou (Michelle Yeoh) and then Captain Gabriel Lorca (Jason Isaacs).

Plot: After the original series went off the air, Roddenberry created an animated series that continued the stories of Star Trek and reunited much of the same cast to do voice work for cartoon versions of their characters.

Plot: Set 100 years after the events of the original Star Trek, this series followed Captain Jean-Luc Picard and his crew (Jonathan Frakes, LeVar Burton and Marina Sirtis, among them) on the fifth iteration of the Enterprise, USS Enterprise-D.

Plot: In Star Trek: Generations (1994), Captain Picard teams up with the once-presumed-dead Captain Kirk. The story unites the casts from the two Star Trek series at the time, effectively passing the baton from Shatner to Stewart. The Next Generation cast went on to star in three more movies, sans the original cast: Star Trek: First Contact, Star Trek: Insurrection and Star Trek Nemesis.

Plot: Set on a space station rather than a starship, Deep Space Nine focuses on the adventures of the people charged with guarding the opening to a wormhole at the end of the galaxy. Deep Space Nine was helmed by Trek’s first black captain, Benjamin Sisko (Avery Brooks). It was also the first Trek series created without Roddenberry, who gave the concept his approval before he passed away in 1991.

Plot: After the ship Voyager gets stranded in the Delta Quadrant (the far side of the Milky Way galaxy) while searching for a renegade ship, they must make the 75-year journey home. Voyager was fronted by Trek’s first female captain, Kathryn Janeway (Kate Mulgrew).

Plot: Many years after a daring mission to save a dying planet, Captain Picard — now an Admiral — has left Starfleet (or, more accurately, Starfleet has left him). But when a mysterious young woman with a potential connection to a certain beloved android shows up at his doorstep, it sets in motion events that lead Picard back into space — albeit with a crew that’s more swashbuckler than Starfleet.

Plot: A bad guy named Nero (Eric Bana), angry that his planet is destroyed in the future, travels back in time and kills Kirk’s father (in 2233). He then hangs out for a long time to destroy Vulcan (in 2258) in front of old Spock who has also traveled back in time (and is played by Leonard Nimoy) because Spock failed to save the baddie’s home planet. Current-day Kirk (Chris Pine) encounters old Spock who explains all the confusing time-jump mechanics to him. Together, current-day Kirk and Spock (Zachary Quinto) become begrudging friends and save the universe.

Plot: The second J.J. Abrams film stars Benedict Cumberbatch as a villain that the marketing team really tried to convince people was not genetically-engineered superhuman Khan. (He was Khan.) Kirk leads a mission to capture Khan after her murders a bunch of Starfleet officers.

Plot: Justin Lin took over for the third reboot film and threw in some motorcycles because he has a thing for fast vehicles. In this one, a baddie named Krall (Idris Elba) kidnaps part of Kirk’s crew in hopes that Kirk will exchange a powerful McGuffin for their safety. 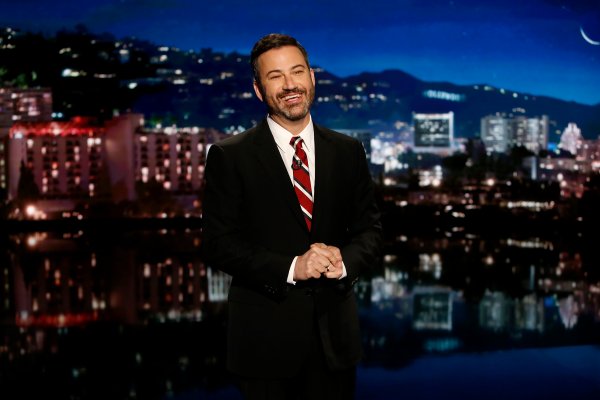 Jimmy Kimmel Is an Unlikely Health Care Advocate. That's Why He's So Effective
Next Up: Editor's Pick