Here's the Story of How David S. Pumpkins Became Your Halloween Hero

David S. Pumpkins is one of the great unsung heroes of our time. Besides becoming a notorious Halloween icon after being brought to life by Tom Hanks on an episode of Saturday Night Live, David S. Pumpkins also became a popular Halloween costume and a hypeman in a memorable SNL rap video starring Kenan Thompson.

However, it turns out that Hanks’ beloved turn as the spooky character almost didn’t happen. According to a story told by SNL alum Bobby Moynihan on Late Night With Seth Meyers, who wrote the sketch with Mikey Day, Hanks wasn’t sure if the sketch was going to work and even went so far as to suggest that they give it to Chris Hemsworth, who would be hosting the next week’s show.

Thankfully for us and them, Hanks decided to stick with the skit and hinted just recently that he might be reprising his role in the near future. Until then, you can watch Moynihan talk about David S. Pumpkins in the full clip above. 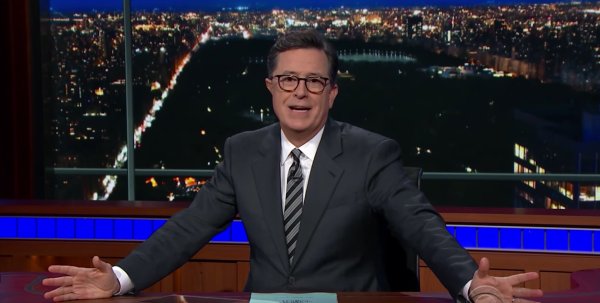 Here's What Stephen Colbert Has to Say About Donald Trump's 'Worst Ever' Emmys Snub
Next Up: Editor's Pick