Spoilers for the movie Mother! ahead

Mother! can best be described as a fever dream — at least that’s how Darren Aronofsky (Black Swan, Requiem for a Dream) conceived of it when he poured the script into his computer in one frantic haze. Drawing on stories and symbols from the Bible, Victorian literature and even The Giving Tree, mother! is an allegory for climate change told from the point of view of Mother Earth herself.

Jennifer Lawrence plays a women who serves as both muse and housewife to a cranky writer (Javier Bardem). Two unexpected visitors (Ed Harris and Michelle Pfeiffer) disrupt the couple’s isolated life in their bucolic home. Tension escalates, and the wife finds herself in increasingly dire straits.

Many critics have speculated that Aronofsky is wrangling with being thrust into the limelight himself. (He and Lawrence are dating.) Aronofsky, who also directed the film, asserts that the film is a wake-up call to humanity. TIME sat down with Aronofsky in New York to dissect the complicated and divisive work.

TIME: mother! is an allegorical epic that has split critics. Why make this film now?

It started off with me wanting to return to the horror genre after Black Swan. I thought that the home-invasion movie would be a good place to start because everyone understands what it means to have a guest who stays too long. At the same time, I thought it would be interesting to talk about another home — not your home, not my home, but our home.

You mean the earth?

The mother of us all. The one who gave us all life. I wanted to tell a movie from Mother Nature’s point of view and talk about her love and her gifts and the way people ultimately cause her pain.

I kept thinking of The Giving Tree while watching — the way that humanity keeps taking and taking from Jennifer Lawrence’s character until there is nothing left of her. Was that an influence?

It was. It’s such a strange book to be one of the most important children’s books in history. It’s a really, really tragic book. I can’t say it was consciously in my head. But very quickly afterwards, I realized I had unconsciously tapped from it.

What were some other inspirations?

The Exterminating Angel, this film by the great surrealist Luis Buñuel, where all the guests at a dinner party got locked in the room for some surreal reason. Through it, he was able to make a commentary on society.

I was thinking about how to talk about global things in a human way. It’s very hard to understand the largest forest fire in history. It’s abstract to understand what that actually means. We see images but don’t absorb it. But everyone understands if someone comes over and burns a hole in your carpet with a cigarette. I tried to take global events and reduce them to a human scale.

I kept thinking, just leave, but of course she can’t.

She is the home. There’s the allegory. You lean into it. But she’s also in love. She’s guilty of a certain amount of insatiability as well, which is she wants love from this man, and she’s willing to let herself suffer to a certain point. That’s very truthful. I know people like that.

Mother! shows people worshipping and then literally tearing apart certain characters. Is it a meditation on the consequences of fame?

To be honest, I wasn’t thinking about that. I think it was a by-product of casting Jennifer Lawrence and Javier Bardem and Michelle Pfeiffer, who have dealt with that in their own lives.

Where do you draw the line when it comes to depicting violence?

I have a real problem with violence and sexuality being used for no reason. Those are very easy tools to rely on and very dangerous to abuse. I try to be truthful to what violence is. There’s nothing glamorous about it.

But every newspaper, you read Section A and there are terrible things happening in the world. But we can’t fathom it. The power of this movie is taking four huge movie stars and putting those [violent] images up in your face. It’s very intense. There are films that are comfort food. I’m not working in that range. I like to push the edges of where feelings are really felt, of what’s expected.

Do you see yourself as the Bardem character, as some critics have assumed?

I felt like I was empathizing most with Jen’s character, but I can see why they would think that. I make movies, he’s a writer — there’s clearly a connection about the male ego. But I’m connected to every character. I was the ballerina in Black Swan. I was the wrestler in The Wrestler. I was the math whiz in Pi.

The story is told from the perspective of a mother and the camera stays very close to her. How did you wrangle with how to tell and shoot a story entirely from a female character’s point of view as a man?

Look, I think we’re all people. I think the beauty of cinema is that you can see a movie about a six-year-old girl from Iran or an 80-year-old guy from Edinburgh, and if the film is made well you can completely get their experience.

When I was a teenager, I would doodle only men, men’s faces and stuff. And then when I got to film school, I thought, “I’ve never done something from a female perspective. I should try it.” And, you know, [making this movie] I’m collaborating with a woman. I would never say, “No! That’s not how a woman would do something!” I may ask, “What’s going on?” But I allow the actor to do her thing, to show the experience through her own instrument.

The movie also draws from biblical stories. Why do you keep returning to religion in your films (as with Noah and Pi)?

These are myths that belong to the world. They are some of the oldest stories that we’ve been telling repeatedly since the beginning of humankind. There’s power to them.

So you’re attracted to the symbolism?

When you think of Icarus, you instantly know what that story means. We never debate whether he actually put on a pair of wings and flew up to the sun. If you were to fight over that, you’d lose the whole point of the story. Through symbols, you can talk about things that are pertinent to people living now.

Speaking of which, mother! came out as the U.S. was reeling from two of the worst hurricanes in history.

It’s very frustrating. I’m a parent. My grandfather came to America to give me and my sister a better life. I can’t give that to my children.

But I’m an optimist about the future. I think by descending into the dark, you can reveal the light. I hope the movie inspires people to act.

Do you think the film is ultimately optimistic? 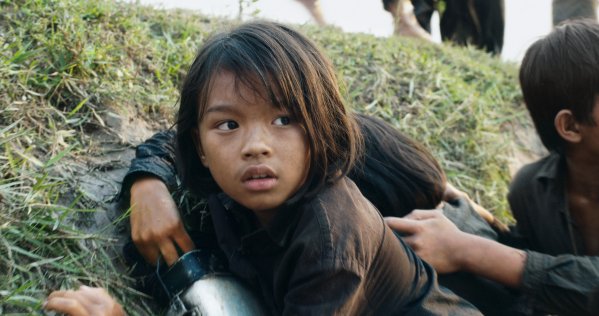 A Child Survives the Khmer Rouge
Next Up: Editor's Pick