Any woman who has negotiated a salary or raise in the past five years (or the past 50) might feel a shiver of recognition watching Jonathan Dayton and Valerie Faris’ buoyant period piece Battle of the Sexes. In 1973, aging tennis legend Bobby Riggs, hoping to recapture the spotlight by crowing that he could beat any female player, challenged the much younger–and, because of her gender, much less well paid–champ Billie Jean King to a match that would become legendary. King won several victories that day: she triumphed over the posturing of insecure sexist dudes everywhere and also made an over-the-net leap toward pay parity for female athletes and for working women everywhere.

Dayton and Faris (Little Miss Sunshine) trace the events leading to that dazzling showdown, along the way capturing sparks of what King and Riggs were like as people and as public personalities. Riggs (Steve Carell) is a player long past his prime, with his big ego perpetually bruised. He’s also a compulsive gambler who is flailing in a faltering marriage. (His probably too-patient wife is played by a regal Elisabeth Shue.) Emma Stone plays King, then one of the top-ranked female players, who was fully aware of how much larger the men’s purses were. With the help of World Tennis magazine founder and go-getter Gladys Heldman (an exquisitely brassy Sarah Silverman), she founds the Women’s Tennis Association, whose first key event is the inaugural Virginia Slims tournament, held in Houston. After clinching the sponsorship, Heldman sweeps in, waving one of those all-too-seductive cigarette packs in the faces of the players assembled for the tour. “You do the tennis, I’ll do the smoking,” she tells them, one glamorous death stick perched elegantly between two fingers.

At the time, Big Tobacco’s sponsorship of a sports event raised few eyebrows. But just being yourself could destroy a career. On the circuit, the married King (Austin Stowell plays her loyal husband) meets and falls for a young hairdresser (Andrea Riseborough). Their affair’s tentative start is one of the movie’s most graceful features: the two flirt cautiously in a club, cushioned by the sound of Tommy James and the Shondells’ “Crimson and Clover,” a song as full of fragile promise as a secret whispered into a pillow.

The performances in Battle of the Sexes, agile and perceptive, keep the game alive every minute. Carell plays Riggs more as an affable, unenlightened boob than a villainous creep. And although the incandescently elfin Stone doesn’t much resemble King–who always looked both refined and California-friendly–she nails King’s thoughtful directness. She also captures King’s marvelous antelope saunter, the casual grace this superb athlete radiated when she wasn’t running for the ball.

Battle of the Sexes isn’t a laundry-list account of everything King would later come to fight for, including LGBT rights. Instead, it’s the story of a woman, already a world-famous athlete, who didn’t yet know how much more she’d become. It’s easy to say, “You’ve come a long way, baby.” Here’s someone who walked, or sprinted, every mile. 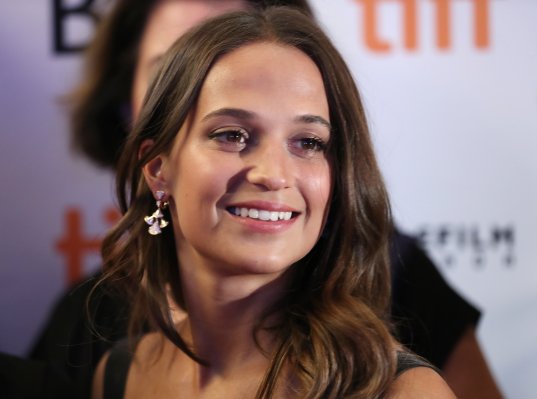 Watch Alicia Vikander as Lara Croft in the Tomb Raider Trailer
Next Up: Editor's Pick