In her first appearance at a United Nations event, Melania Trump focused on issues facing the world’s children, urging adults to take the lead in teaching them “life’s many ethical lessons” and combating cyberbullying.

Hosting a luncheon for spouses of U.N. world leaders and committee heads on Wednesday, Trump stressed the importance of leading and teaching children “by our own example,” saying that “as adults we are not merely responsible — we are accountable.”

“Whether it is drug addiction, bullying, poverty, disease, trafficking, illiteracy, or hunger, it is the children who are hit first and hardest in any country,” Trump said. The First Lady also condemned bullying both “online and in person,” and referenced the need to address “the message and content they [children] are exposed to on a daily basis through social media.”

During the 2016 presidential election campaign, Trump pledged to make the fight against cyberbullying one of her key priorities as First Lady. However, critics have previously pointed to the nature of her husband’s social media habits, which have included a Twitter tirade against Morning Joe host Mika Brzenzinski, a retweeted reference to Fox News host Megyn Kelly as a “bimbo”, and most recently, a retweet of a video of Trump hitting Hillary Clinton with a golf ball.

Melania Trump has defended the President over his controversial comments in the past, and according to the Washington Post, did not refer to him in the speech. Internet commentators were quick to compare the topic of bullying in Trump’s speech with the behavior of her husband.

Although the President’s debut speech at the U.N made headlines this week, both Ivanka and Melania Trump hosted and attended events of their own at the global summit. 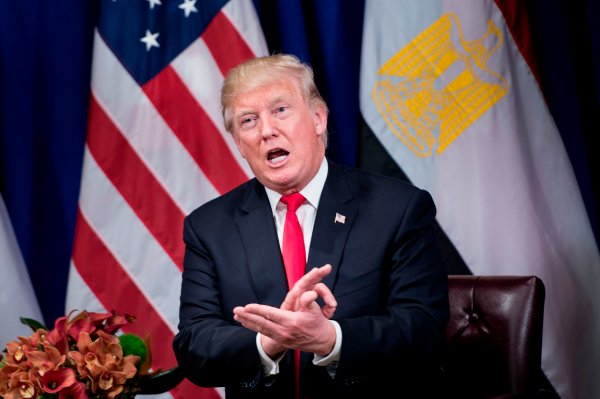 President Trump Says He Expected a Health Care Bill on His Desk As Soon as He Got Into Office
Next Up: Editor's Pick