Jake LaMotta, the former middleweight boxing champion who died Wednesday at age 95 from complications from pneumonia, handed Sugar Ray Robinson, the man that many sweaty scholars of the sweet science consider the best pound-for-pound fighter of all-time, his first-ever loss. His bouts with Robinson defined boxing in the 1940s and 1950s, an era when the sport soared in popularity. LaMotta’s combustable life, both inside and outside the ring, were brilliantly captured in Raging Bull, the 1980 Martin Scorsese film that won Robert De Niro, who portrayed LaMotta, an Oscar, and is recognized as one of the best and most influential movies ever made.

America has seen more impressive athletes than Jake LaMotta. But arguably no boxer over the last 100 years, outside Muhammad Ali and maybe Mike Tyson in his prime, left a firmer imprint on American culture.

LaMotta grew up in a rat-infested Bronx tenement. His father often beat him. He’d fight other kids for street-side entertainment. Those bouts earned him money to pay the family’s rent. He shipped off to reform school after trying to rob a jewelry store. Another future world middleweight champ, Rocky Graziano, was a classmate there.

As a pro fighter, he was, in the words of Robinson, an “animal.” During LaMotta’s career, which stretched from 1941 through 1954, he compiled a 83-19-4 record, but was only knocked down once, in 1952, towards the end of his run. (LaMotta fell to the canvass in another fight, but he threw it). He fought Robinson six times, including twice in a three-week span in 1943, a remarkable reminder that boxers used to participate in a functional sport with regular major events, while also putting their brains at risk of regular beatings.

LaMotta’s only win against Robinson came during that period, on February 5, 1943, in Robinson’s hometown of Detroit. He knocked Robinson through the ropes in the eighth round and won the decision. On February 26th, they fought again in Detroit, and LaMotta knocked Robinson down in the seventh. Robinson got up at the nine-count. Robinson, who enlisted in the Army the next day, won a close decision. LaMotta claimed the judges gifted Robinson a victory for his military service.

Their styles clashed: Robinson danced in the ring, while LaMotta plodded and punched. “His heart was that of a thoroughbred trapped inside the body of a mule,” the late boxing historian Bert Sugar wrote of LaMotta. Often, taking punches was part of his game plan. The effort would wear LaMotta’s opponent out.

Organized crime had infiltrated boxing during this time, and LaMotta famously took a dive against Billy Fox in 1947 in New York City. “By [the fourth round], if there was anybody in the Garden who didn’t know what was happening, he must have been dead drunk,” LaMotta later wrote about his fight with Fox. The subsequent $20,000 payment to the mob got LaMotta a shot at the middleweight title in 1949. He defeated Michael Cerdan, of France, for the crown, and held it until February 14, 1951, when Robinson pummeled LaMotta in Chicago. The punches left LaMotta bloodied. “How he can survive them,” said the fight announcer, “nobody knows.” The fight ended in the 13th round, on a TKO, with LaMotta resting on the ropes. It was dubbed the St. Valentine’s Day Massacre.

After boxing, LaMotta tried his hand at stand up comedy, acting, and owning nightclubs and bars. In 1958, he spent six months on a chain gang after being convicted of introducing men to an underage girl at a nightclub he owned. Raging Bull portrayed LaMotta as a jealous, insecure wife-beater entwined with the mafia. “I kind of look bad in it,” LaMotta told the New York Times. “Then I realized it was true. That’s the way it was. I was a no-good bastard.”

LaMotta married six times, and he lost both of his sons within a year of one another — Jake Jr. died of cancer in 1998, at 51; Joseph, 49, was a victim of the September 1998 Swissair crash that killed 229 people. Later in life,LaMotta settled into the role of athletic elder, making money at memorabilia and autograph shows.

“I had such a crazy life,” LaMotta told the Orange County Register in 2015. “How I got away with it I don’t know.” 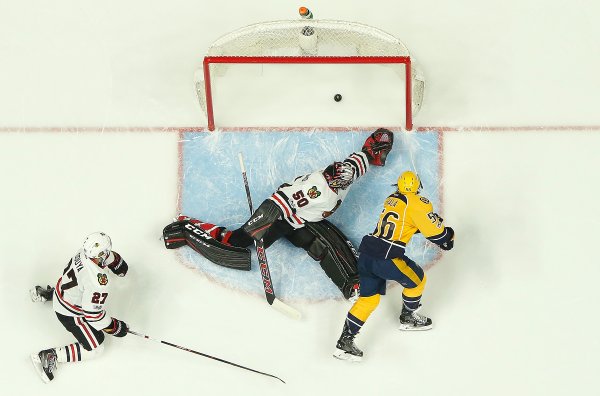 The NHL Is Not Allowing Players to Compete in the 2018 Winter Olympics. Here's What to Know
Next Up: Editor's Pick