Boston Marathon Bombing Survivor on Reliving His Story Through the Movie Stronger: 'It Was Hard But It Was Beautiful'

The Boston Marathon bombing survivor who inspired the new movie Stronger was brought to tears while watching the film, which he said triggered feelings of pain, love and regret.

Jeff Bauman, now 31, instantly became a symbol of resilience after he was captured in a widely shared and haunting image from the 2013 bombings. The Carlisle, Mass. man was standing at the race’s finish line, waiting for his ex-girlfriend, when the first bomb exploded. Bauman lost both of his legs in the attack but was able to help the FBI identify one of the bombers after he went through surgery.

Bauman is helped by EMT Paul Mitchell, left, Carlos Arredondo, center, and Devin Wang, right, after he was injured in one of two explosions near the finish line of the Boston Marathon on April 15, 2013.
Charles Krupa—AP

Stronger, which hits theaters Friday, chronicles Bauman’s agonizing real-life road to recovery. He was hailed as a national hero and became a local celebrity, but he struggled to accept his new life, which put a strain on his newly reconciled relationship with his girlfriend, Erin Hurley.

The film is based on Bauman’s memoir of the same name and stars Jake Gyllenhaal, who plays Bauman, and Tatiana Maslany, who portrays Hurley.

“It’s really emotional for me,” Bauman told TIME ahead of the film’s big-screen debut.

The hardest scenes for Bauman to watch were the ones depicting Hurley by his side — particularly a scene that shows his character in the hospital, getting his bandages changed for the first time. Gyllenhaal can be seen howling in pain as Maslany presses her forehead against his.

“The tears – I couldn’t hold them back. They were running down my face,” Bauman said. “It was hard, but it was beautiful. It just brought me back.”

Bauman walks on his own for the first time since the marathon at a final fitting for his prosthetic legs in Massachusetts on May 31, 2013.
Josh Haner—The New York Times/Redux

Bauman and Hurley welcomed their baby girl, Nora, in July 2014 and tied the knot a few months later. However, they have since separated, Bauman said. The two remain friends and attended the premiere of Stronger side by side. “We watched it together. It was hard. She was crying. I was crying. It was really emotional to relive our relationship,” Bauman said.

In a few scenes, Bauman and Hurley’s characters argue over how Bauman handles his depression and his resistance to being seen as a symbol of hope for Boston. Inside an elevator, after an appearance at a Boston Bruins game, Bauman shouts at her at the top of his lungs not to touch him, which brings her to tears. Bauman said it was eye-opening and sad to see his real experiences play out before him.

“It’s really tough for me to see that now. I didn’t see it then,” he said of how poorly he treated his girlfriend. “I knew she was there with me. I kind of push her away. That’s kind of how we are. We love each other, but I’m always pushing her away.”

Four years after the bombings, Bauman has learned how to walk on prosthetic legs, but he’s still working on processing his emotions.

“It’s still hard every day. I think right now what’s really important for me is to heal mentally,” he said. “I kind of delayed that process because I was so focused on the physical aspect, you know, of getting up. I forgot about my emotional side.”

“I think that really set me back,” he added. “I should have been working on that 50/50, and I wasn’t. It showed in the movie, obviously. Now I’m catching up on it. That’ll be an ongoing process, I think, for the rest of my life.”

Bauman said he cut out alcohol 15 months ago and has gone back to school full-time to pursue a mechanical engineering degree. He still keeps in touch with Gyllenhaal, who Bauman called his “older brother.” The searing memories of the blast are starting to fade, replaced with happier moments with his daughter. And Bauman is focusing on making the best of what life has given him.

“I think it’s more trying to find my new normal,” he said. “I just want people to know that I’m OK, and if I can get through something this traumatic, anybody can get through what’s going on in their life. Life isn’t perfect. You can get through it.” 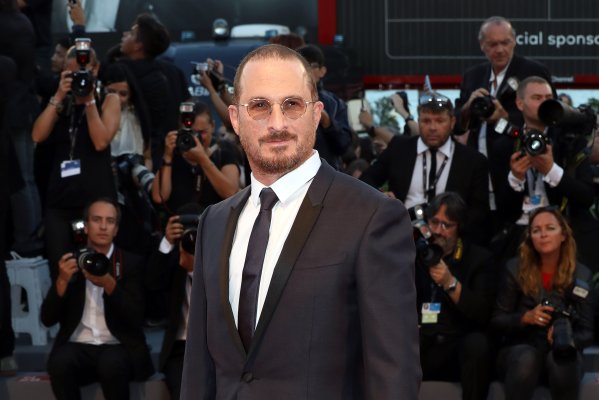 Allow Darren Aronofsky to Explain mother!
Next Up: Editor's Pick