Late Tuesday night in New York, French President Emmanuel Macron texted a friend in Paris, giving his self-assessment of his debut speech at the United Nations. “I gave it everything I had, I tell you,” Macron texted in response to the congratulations his friend had sent. That friend shared the text with TIME on Wednesday morning. Macron ended the message with a common French sign-off: “Kisses.”

But “giving it everything” might not be enough as Macron makes a passionate plea for international negotiations on climate change, the Middle East, North Korea, and other urgent global matters. That is especially true when set against U.S. President Donald Trump’s own U.N. speech, given just hours before Macron’s address, in which the President threatened that the U.S. would isolate Iran and obliterate North Korea.

Among the scores of world leaders gathered in New York this week for the U.N. General Assembly, Trump and Macron are perhaps the most curious pair. Both are newcomers who shot to power this year as first-time politicians. And on Tuesday, they made almost back-to-back debuts on the world’s biggest global stage.

On the surface, the two are a study in contrasts in politics, style and personality: The hardline America First champion versus the fervent globalist, the lumbering 71-year-old billionaire versus the slender 39-year-old wonky intellectual.

But one crucial fact binds the pair—and that fact could be key to the decisions that world leaders make in the months and years ahead. Trump and Macron represent two of only five nations with permanent veto power on the U.N. Security Council, nicknamed the P-5. (China, Russia and the United Kingdom round out the group.) That is an immensely powerful clique, one that can potentially sway the rest of the world’s leaders into declaring war, imposing sanctions, or block them from taking any action at all.

What’s more, Trump and Macron are the only two P-5 leaders that truly count this week. Russian President Vladimir Putin and Chinese President Xi Xiping both stayed away from this year’s U.N. General Assembly, where their policies over North Korea, Syria and other issues are under scrutiny. And although British Prime Minister Theresa May addressed the world body on Tuesday, she is heavily focused on her country’s fraught exit from the European Union.

That leaves the U.N.’s odd couple, Trump and Macron.

In his speech, Trump said he “would always put America first” and that he expected leaders from across the world to likewise “put your countries first.” It’s a message that runs counter to the consensual give and take that has dominated the U.N. for nearly 70 years.

“It is in everyone’s interest,” Trump said, “to seek a future where nations can be sovereign,” a word he used 19 times in his speech. He railed against North Korean President Kim Jong Un as a “rocket man on a suicide mission.” He called the Iran nuclear deal—painstakingly negotiated through the U.N. and signed in 2015—an “embarrassment to the United States.”

Just two hours later, Macron stood at the same podium. Without mentioning the U.S. President, he told world leaders that Trump-like nationalism was nothing more than a message of “survival of the fittest.” In contrast to Trump, Macron tried to carve for himself a role as the world’s loudest voice for negotiations on a range of issues, as well as the foremost leader on one of the most critical global problems: climate change. “Our planet is wreaking revenge for the follies of mankind,” Macron told world leaders, some of whose countries have been rocked by this summer’s onslaught of hurricanes and other natural disasters.

Meanwhile, Trump announced in June that he would withdraw the U.S. from the Paris Agreement on climate change, to which nearly every country in the world is a signatory. The agreement was the result of years of U.N.-led negotiations, and aims to maintain global warming at a maximum of two degrees Celsius above the Earth’s pre-industrial levels. (Scientists say meeting this goal is essential to avoid spectacular environmental disaster.) Macron, in the most passionate moment of his speech on Tuesday, vowed that the Paris Agreement would remain intact despite Trump’s decision. “It was signed in this very room,” he said in the U.N. chamber. “That agreement is not up for renegotiation.”

In an interview with CNN’s Christiana Amanpour broadcast after his speech, Macron said he wanted to “convince [Trump] to come back” to the climate agreement, and regards it as essential to keep an ongoing dialogue with the American President. There are other issues, too, on which Macron seems determined to try change Trump’s mind, including the Iran nuclear deal, which he told Amanpour he believed was “better than nothing.”

That crucial need to keep Trump on-side in international agreements—key to the U.N.—is one big reason Macron’s relationship with him appears increasingly important. Trump was Macron’s guest of honor at France’s Bastille Day military parade in July. And when Macron landed in New York on Monday, his first stop was to meet Trump at the Palace Hotel in Manhattan. At a press conference on Tuesday, Macron told reporters that Trump is his “partner” in the fight against terrorism, which has rocked France in recent years. “He [Trump] respects a partner who states his positions and tries to convince him,” he said. “But we have to recognize we have our disagreements.”

That is putting it delicately. Still, those who have watched Macron say he shares one important characteristic with Trump: His tendency to speak bluntly. “They are very direct people,” says Philippe Besson, a Paris novelist whose new book, “A Character Out of a Novel,” describes Macron’s rise to power. “They say things as they are,” Besson adds — even if their words are worlds apart. 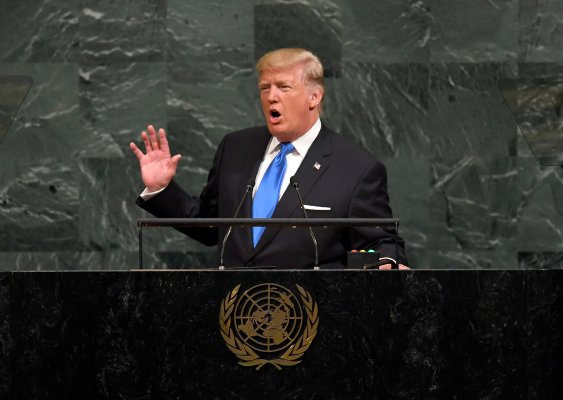