During his first presidential speech at the United Nations on Tuesday, President Trump cited the “strength and patience” of his nation before telling the audience that “if [the U.S.] is forced to defend itself or its allies, we will have no choice but to totally destroy North Korea.”

This is not, as it happens, the first time a nuclear power has openly threatened another state with destruction — but the previous episode does not bode well for President Trump, or for the world.

In 1956 only the United States, the USSR and Great Britain had nuclear weapons. It turns out that Russia was quite a ways from a real ICBM capability at that time — in other words, they had nuclear weapons but no way to deliver them to overseas targets — but Nikita Khrushchev, the head of the Soviet Communist Party, claimed otherwise.

In the fall of that year, in the midst of a U.S. presidential election in which Dwight Eisenhower was re-elected over Adlai Stevenson, the British, French and Israeli governments decided to attack Egypt in an effort to oust its leader, the Arab nationalist Gamel Abdul Nasser. The British could not forgive Nasser for nationalizing the Suez Canal, the French blamed him for the revolt against their rule in Algeria and the Israelis saw an opportunity to expand their territory into the Sinai Peninsula. Suspecting quite rightly that Washington might not back the adventure, they did not inform the U.S. government before the attack began. The United States was clearly furious.

On Nov. 5, Soviet premier Nikolai Bulganin — who was clearly speaking for Khrushchev — dispatched diplomatic notes to Tel Aviv, Paris, London and the United Nations. The note to the British subtly threatened nuclear retaliation, pointing out that there were countries that would go unnamed but that had the ability to attack the U.K. by rocket.

“Nothing can justify the fact that the armed forces of Britain and France, two great powers, permanent members of the Security Council, have attacked a country which only recently gained its state independence and which does not have sufficient means for its defense,” the note read. “In what position would Britain have found herself if she herself had been attacked by more powerful states possessing every kind of modern destructive weapon? And there are countries now which need not have sent a navy or air force to the coasts of Britain but could have used other means, such as rocket technique.” The British and French would have called this “barbarous,” Bulganin said, but it would not have differed from the attack they themselves had made.

The Soviets were bluffing, we now know, but they did so from a position of diplomatic strength. The United States joined with them at the U.N. to pressure the British and French into a cease fire, and the Administration eventually forced the Israelis out of the Sinai by threatening to end the tax deduction for American citizens’ contributions to Israel. As the great political scientist Adam Ulam pointed out 40 years ago, Khrushchev was convinced that nuclear blackmail could work.

Khrushchev tried that tactic again two years later, in 1958, when he implicitly threatened nuclear war with the whole western alliance over the matter of Germany and Berlin.

This time, he argued that the western powers had to recognize the Communist government of East Germany as part of a peace treaty that would end the four-power occupation of Germany. The occupation of Berlin would also end and West Berlin would become an independent Free City within East Germany. Khrushchev threatened to declare it as such himself and turn the control of access to West Berlin — which was deep inside East Germany — over to the East Germans, with whom the western allies (and West Germany) were refusing to deal. If western forces tried to reach West Berlin without East German permission, Khrushchev made clear during 1958, and fighting broke out, the USSR would regard this as an attack on itself and resort to full-scale war. Khrushchev repeated this threat again and again over the next three years, bringing NATO and the Warsaw Pact to the brink of war, but the situation cooled down a bit in August 1961 after the Berlin Wall stopped the flood of East German refugees to West Berlin.

Khrushchev, however, was preparing a more direct military threat: the introduction of Soviet nuclear missiles into Cuba. He may have intended to use them to bluff the U.S. out of Berlin. Significantly, when the U.S. government discovered the missiles, President Kennedy did not threaten Cuba with total destruction, nor did the military prepare to hit Cuba with nuclear weapons. Kennedy did threaten the USSR with nuclear retaliation if Soviet missiles in Cuba reached the U.S., but that was the standard Cold War doctrine of retaliation. That, and the local military superiority of the U.S. in the Caribbean, was enough to convince Khrushchev to withdraw the missiles.

Notably, both of these nuclear threats came in response to very specific events, either already underway (in the case of Suez) or clearly anticipated (regarding Berlin). Bulganin implied that the USSR might attack Britain and France with missiles if they did not stop their attack on Egypt and Khrushchev threatened war leading to a nuclear exchange if the West would not surrender its rights in West Berlin. But Trump has not confined himself to threats to retaliate against North Korea in the case of an actual attack on the U.S. He and Ambassador Haley have clearly threatened an attack — and perhaps a nuclear one, given the President’s comments about “fire and fury” — if North Korea simply continues testing missiles and warheads, or continues to threaten the United States.

Khrushchev’s threats gave the world four of the most anxious years of the whole 20th century. Significantly, a year after the Cuban missile crisis, his Politburo colleagues had had enough, and they managed to peacefully remove him from power, the only time in the whole history of the USSR that such a transfer took place. Barring unforeseen events, we have three years before the United States will have the chance to do the same. Meanwhile the world will hold its breath. 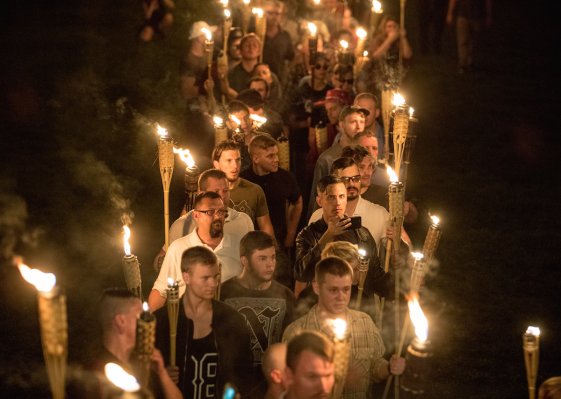 Blaming 'Bad Dudes' Masks the Role of Women in the History of White Nationalism
Next Up: Editor's Pick