All year every year, streams of North Korean schoolchildren make the pilgrimage to Sinchon, a farming town south of Pyongyang. There, a palatial museum teaches them a fundamental lesson: America is the enemy.

Each diorama-filled room of the Sinchon Museum of United States Atrocities is dedicated to the “jackals that infiltrated into all areas of life of the Korean people to suck blood out of the country.” From brainwashing missionaries to the “Hitler-esque” U.S. troops — who, displays claim, slaughtered 35,000 civilians nearby at the start of the 1950-53 Korean War — America is portrayed as craving to exterminate the “free” people of Korea.

“The massacres committed by the U.S. imperialist aggressors in Sinchon evidently showed that they are cannibals and homicides seeking pleasure in slaughter,” Supreme Leader Kim Jong Un said during a visit in 2014, according to state news agency KCNA.

On Tuesday, U.S. President Donald Trump did his bit for Sinchon’s gate receipts — and Kim’s propaganda machine in general. Addressing the U.N. General Assembly in New York for the first time, Trump said, “If [the U.S.] is forced to defend itself or its allies, we will have no choice but to totally destroy North Korea.” He added a snarking rebuke for the Supreme Leader: “Rocket man is on a suicide mission.”

Kim Jong Un’s efforts to develop a ballistic missile that can strike the continental U.S. shouldn’t be a laughing matter for the U.S. commander-in-chief, though a sense of frustration seeps through his jibes. More worrying, however, is that Trump is playing into the hands of the Stalinist regime’s victim complex by threatening its annihilation. Such rhetoric endorses the propaganda posters that pepper the isolated state, urging “death to U.S. imperialists,” and for its embattled 25 million populace to remain on a war footing, sacrificing freedoms to be in a state of perpetual combat readiness.

“This is just a boon to North Korea,” Prof. Stephan Haggard, a Korea expert at the UC San Diego School of Global Policy, says of Trump’s speech. “Because you have a regime that has built its entire existence around the idea that the United States is out to destroy them, and the U.S. President is saying just that.”

Indulging that feeling naturally makes the regime less, not more, likely to negotiate to halt its weapons program. Libyan tyrant Muammar Gaddafi and Iraqi despot Saddam Hussein were both coaxed into abandoning their nuclear ambitions, only for the U.S. help topple their regimes when the political winds changed. Trump’s U.N. speech — which also took aim at fellow “rogue regimes” like Iran and Venezuela — painted redemption as nigh impossible. Margot Wallstrom, foreign minister of Sweden, called it, “a speech at the wrong time to the wrong audience.”

It’s a viewpoint shared by China. In an editorial, the state-run China Daily said: “today’s dangerous deadlock has been the result of Pyongyang’s and Washington’s persistent pursuit of their own interests in disregard of other countries’ efforts to persuade the two antagonists to talk. [Trump’s] threat to ‘totally destroy’ the DPRK if need be will, therefore, likely worsen the already volatile situation.”

Nor does it make much sense. Kim has tested 22 missiles and a 120-kiloton nuclear device — his nation’s sixth — this year alone in his bid to achieve military “equilibrium” with the U.S. His latest missile flew further than the distance to the U.S. Pacific territory of Guam. Given the conventional, and possible nuclear, weaponry North Korea could use against U.S. allies South Korea and Japan, Trump’s threats are largely impotent. They also drive a wedge between America’s East Asian alliances.

“China will be worried about the speech, like other related countries around the world,” Shi Yinhong, professor of international relations at Beijing’s Renmin University, tells TIME. “It’s such an important forum. It’s hard for South Korea to follow Trump when he is as wild as this. And the gap between China and America on this issue will deepen.”

Keeping Beijing on side is paramount for the strength of U.N. sanctions, given China is responsible for around 90% of North Korean trade across the 880-mile shared frontier. China has the power to rein in the shadowy cross-border cartels that provide the revenue that keep Pyongyang’s nuclear program solvent, by clamping down on the Chinese members. However, Beijing will never squeeze hard enough to foment the collapse of the regime and an influx of refugees, especially as uniting the peninsular may put U.S. troops on its border.

There is also resistance within the Chinese leadership on ideological matters. While many consider North Korea’s escalating nuclear and missile tests a dangerous provocation, there remain hardliners who believe North Korea is a socialist brother worthy of Beijing’s support. While it is hard to gauge all the opinions within the opaque Chinese Communist Party, there are some clues.

Zhou Xiaojia, a postdoctoral researcher at Fudan University of Shanghai, recently published an ambitious survey titled, “The North Korean Nuclear Issue and the Perspectives of Chinese Scholars.” In it she found a broad swath of opinions, from those that backed Washington, to those that supported Beijing’s attempts to peacefully cajole Kim to relinquish his nuclear arsenal, to those that supported North Korea’s right to have a nuclear deterrent. It is likely that China’s governing officials fall into similar camps. Trump’s rhetoric, however, bolsters the claims of those who say North Korea is the victim of American aggression.

Which is exactly the impression Kim wants to inculcate, and why, after his visit in 2014, the young despot ordered a full refurbishment of the Sinchon museum. A grand new exhibition hall was constructed with terrifying fresh exhibits, such as a display of an American soldier pulling the hair of a young Korean woman lashed to a tree, as another “Yankee” plunges a knife into her chest. For Kim, threats of “total destruction” are not a concern — but a source of succor. Adds Haggard: “there’s a rally around the flag when you’re under this type of assault.” 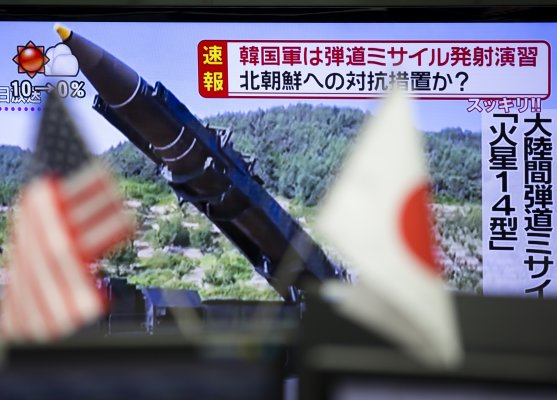 North Korean Missile Alerts Are the New Normal in Japan
Next Up: Editor's Pick