A Mexican news station was broadcasting live the moment a magnitude 7.1 earthquake hit the country Tuesday, close to the capital Mexico City.

The powerful quake killed at least 248 people and brought down dozens of buildings in the capital alone. Thousands of people fled into the streets and early Wednesday rescue workers were still digging through mounds of rubble, looking for survivors.

The anchor at Foro TV was in the middle of a segment with his reporter from the field, when the earthquake warning sirens began to wail. Enrique Campos told viewers in Spanish: “Right now that’s the earthquake alarm going off, this is not a drill,” in a translation provided by Business Insider. “We’re feeling an earthquake now, the floor is moving,” he said as the studio started shaking.

In the video, overhead studio equipment and lights can be seen swinging back and forth, as the station’s audio went silent.

“You all already know what you have to do now: Stay calm, and evacuate immediately. I’m going to get up and evacuate,” the anchor told the audience before leaving the studio.

The earthquake is the deadliest in Mexico since a 1985 quake on the same date killed more than 5,000 people. 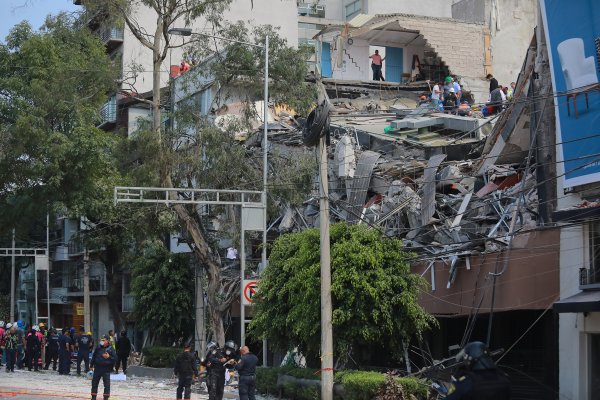