Just two weeks ago, the forecast for Republicans was bleak: the GOP had dramatically failed to repeal Obamacare earlier in the summer, and reports of tension on Capitol Hill made it seem unlikely they would pull it together.

But in a startling reversal of fortune over the last week, Republicans lawmakers have resuscitated a new effort to dismantle the Affordable Care Act.

The bill in question, Graham-Cassidy, named for its co-sponsors Sens. Lindsey Graham and Bill Cassidy, has earned the White House’s backing, and received tacit support on Tuesday from Senate Majority Leader Mitch McConnell.

“It is better than the status quo by far. That’s an argument we’re comfortable making,” McConnell said at a press conference outside the Senate chamber after the weekly party caucus luncheons. “If we’re going to go forward, we’ll have to act before Sept. 30. We’re in the process of discussing this.”

Graham-Cassidy would be a massive restructuring of the current U.S. healthcare system. Under the Affordable Care Act, the federal government foots the bill for an ongoing expansion of Medicaid and subsidies that ease healthcare costs for less fortunate Americans — an annual tab of about $110 billion — and Graham-Cassidy would do away with both.

Instead, it would introduce a decade-long “block grant” system that would give each state an annual lump sum with which they can devise their own healthcare systems. It will also eliminate the federal requirements that individuals have health insurance and that employers provide it to their employees.

“It will allow people in your states to make decisions that would have been made in Washington,” Graham said at the press conference alongside McConnell on Tuesday. “If you don’t like your healthcare, somebody will listen to you. You can go to your statehouse representative, who likely goes to the same hospital you do.”

Regarding the future of the bill, Graham said that he’s “never felt better about where we’re at.”

The Senate has until just Sept. 30 to vote on the bill under the process known as reconciliation, which will require just a simple majority — 50 votes — for it to pass. It is a last-ditch effort by a Republican Congress anxiously clamoring for a victory as the G.O.P. controls the White House and both chambers of Congress for the first time in a decade.

But the Obamacare repeal attempt this summer failed spectacularly, and the Republican leadership has been left to answer to an increasingly irate base. The agitation has mounted in recent weeks following Trump’s decision to shirk his party and instead work with Democratic chieftains Nancy Pelosi and Chuck Schumer on politically sensitive issues, most recently immigration.

“Look, if you spent seven years raising literally hundreds of millions of dollars from donors on the promise that you would repeal the Affordable Care Act, then you’d feel a certain monkey on your back,” Andy Slavitt, who oversaw Medicare and Medicaid under President Obama, told TIME. “But this is extreme. Under the Affordable Care Act, I can leave my job, start a business, become a contractor — because I know I’ll have health insurance if something happens. That massive comfort is going to disappear.”

But despite the widespread enthusiasm from more vocal Republicans and White House officials — among them Vice-President Mike Pence, who visited the Capitol to discuss the bill with lawmakers on Tuesday — it is not yet clear that a critical mass of lawmakers will throw their support behind it. (Sen. John Cornyn, the Senate Majority Whip, said on Tuesday that the leadership is “ready [to bring the bill to the floor] as soon as the votes work.”)

There is Sen. Rand Paul, who has denounced the Graham-Cassidy bill as “Obamacare Lite” and told TIME on Tuesday that he unequivocally won’t vote for it.

“People should have a choice: are you for repealing Obamacare or keeping it? And I think this actually keeps it,” Paul said. “I’m for a complete repeal, a clean repeal.”

“I’m uncertain about the bill,” Republican Sen. John Kennedy of Louisiana told reporters on Monday. “I want to make certain that if we give these block grants to the states, these states aren’t going to go out and say ‘Thank you so much, now we’re going to go out and set up a single-payer system.’ I’ve said it before: the first chance I get to repeal the Affordable Care Act, I’m going to do it. I just have to determine if this is better than the Affordable Care Act.”

Eyes are also on the three Republicans who cast lethal “no” votes on the Obamacare repeal effort earlier this summer: Sen. Susan Collins of Maine, Sen. Lisa Murkowski of Alaska, and most notably, Sen. John McCain of Arizona, who told reporters on Monday that he is “not supportive of the bill yet.” (An earlier announcement from his state’s governor, David Ducey, in support of the bill could put pressure on him to back it, however.)

Speaking to reporters on Tuesday, Collins said that she “is still looking at it, but has major reservations.”

And even if the Senate passes it, there is no guaranteeing it survives the House. Graham said on Tuesday that he has received verbal support from Speaker of the House Paul Ryan, but it will face a potential hurdle in lawmakers from states with older populations, such as New York, Florida and Ohio, which have benefited from the Medicaid expansion that would be curtailed.

In any event, Democrats are circling the wagons for a fight. In a letter to her House colleagues on Tuesday, House Minority Leader Nancy Pelosi implored Democrats to hold public events over the next few days to openly condemn the Graham-Cassidy plan. At a press conference on Monday, standing before a poster with the words “TRUMPCARE AGAIN?” slashed out in red, Senate Minority Leader Chuck Schumer denounced the bill as “a hastily constructed piece of legislation put together in back rooms by only one party.”

“This bill is even more dangerous than its predecessors,” Schumer said. “If it becomes law, our healthcare system will be dramatically curtailed.” He said that passing the bill without a complete assessment of its impact from the Congressional Budget Office — not expected to arrive until after the end of the month — would amount to “legislative malpractice of the highest order.”

“It’s just tragic that people are playing politics with public health,” Sen. Kamala Harris of California, a state expected to be heavily impacted by Graham-Cassidy, told TIME on Tuesday. “Each day, the people here in D.C. should be learning that this is a nonpartisan issue. Americans want access to healthcare. And it really strikes me that the reason [Republicans] are trying to this again, even though it failed the last time, is that they need to keep some political promise. If it was a bad idea, admit it and don’t push it.”

Correction: The original version of this story misstated the position of Bill Cassidy. He is a Republican Senator from Louisiana, not a Representative. 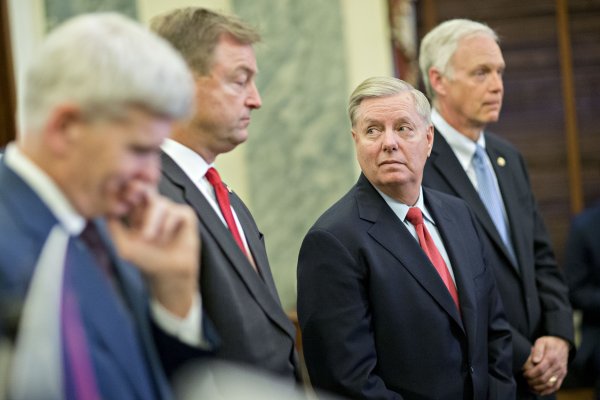 Here's How the Latest Attempt to Repeal Obamacare Would Work
Next Up: Editor's Pick