Stanislav Petrov, the retired officer of the Soviet Air Defense Forces whose death at the age of 77 was announced this week, did not enjoy discussing the day he averted a nuclear holocaust.

Maybe he was tired of giving interviews about the fateful cameo he played in the history of the Cold War. Or maybe he was just in a bad mood when he took a call from TIME one summer morning in 2015. But whatever the reason, the first mention of his heroism made him spit across the line from his home in a suburb of Moscow. “Chush!” he hissed into the phone in Russian. “Nonsense! I was just doing my job.”

That job was on the Soviet early-warning system codenamed Oko, or Eye, whose function was to detect the launch of an American nuclear attack. Its command center was inside a massive bunker beneath the secret city of Serpukhov-15, just south of Moscow. Having helped design and install the facility, Petrov was at the controls on the night of Sept. 26, 1983, when the sirens inside the bunker began to wail.

It was a tense moment in Cold War History. Over the Sea of Japan, a Soviet jet had mistakenly shot down a civilian airliner only three weeks earlier, killing all 269 people on board, among them a U.S. congressman and 61 other Americans. Six months before that, President Ronald Reagan had announced plans for a European missile defense system, which the Kremlin saw as a major threat to its nuclear arsenal. Yuri Andropov, the KGB chief who had become the leader of the Soviet Union the year before, was known for his paranoia about an American pre-emptive strike taking out his missile silos.

So both sides were on high alert when the Oko system’s satellites spotted the launch of an American ballistic missile, followed in quick succession by four others. “We built the system to rule out the possibility of false alarms,” Petrov told TIME in 2015. “And that day the satellites told us with the highest degree of certainty that these rockets were on the way.”

Stanislav Petrov, a former lieutenant colonel in the Soviet Air Defense Forces, photographed near his home in Moscow, Oct. 24, 2015.
Alexander Gronsky for TIME

It was up to Petrov to confirm the incoming attack to the Soviet leaders, who would then launch a retaliatory strike while the U.S. missiles were still in the air. “I thought the chances were 50-50 that the warnings were real,” he recalls. “But I didn’t want to be the one responsible for starting a third world war.” So he told his commanders that the alarm was false. After a six-month investigation, Petrov and his colleagues discovered the reason for the mix-up: Soviet satellites had mistaken the sun’s reflection in some clouds for the start of an American missile salvo.

“Can you imagine? It was as though a child had been playing with a vanity mirror, throwing around the sun’s reflection,” he explained. “And by chance that blinding light landed right in the center of the system’s eye.” This discovery – and the seeming randomness of the events that brought the world so close to catastrophe – would shadow him for the rest of his life.

But on the day he spoke to TIME, he wanted to talk about the present, not the past. Relations between the U.S. and Russia at the time of that interview had grown almost as cold as they were when Petrov held the rank of Lieutenant Colonel in the 1980s. In the final years of his life, he said he saw the world tumbling again toward the type of nuclear standoffs that could kill millions of people in the span of an hour – not by design but by accident. “The slightest false move can lead to colossal consequences,” he told me. “That hasn’t changed.”

Since Petrov offered that warning, things only seem to have gotten worse. Both the U.S. and Russia are rapidly modernizing their nuclear weapons, building smaller, more mobile nukes whose launch could be easier to justify in a time of war. U.S. President Donald Trump has begun trading nuclear threats of “fire and fury” with the world’s newest nuclear power, North Korea. On the week that Petrov’s death became public, Russia began a series of military exercises that were expected to include a simulated nuclear attack.

The lesson he most wanted to get across in our conversation was not about the destructive power of nuclear weapons. It was the inevitability of human error and miscalculation in handling them, especially at a time when politicians begin to threaten war rather than talk about peace. “That’s when things can go terribly wrong,” he said. “One way or another, you still need a person to order a launch of one of these weapons, and a person can always make a mistake.” Thankfully, Petrov did not. 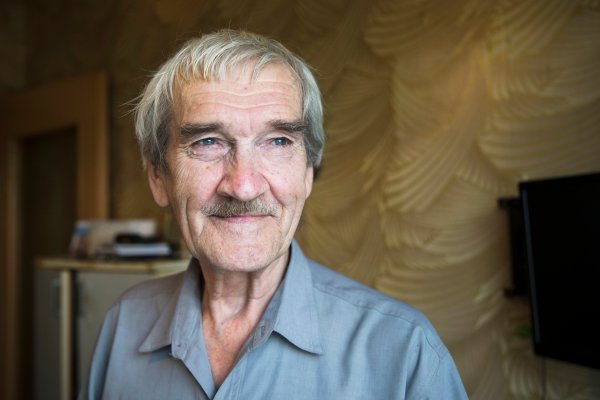